Application of Islamic Sharia law in overturning of the existing civil laws. 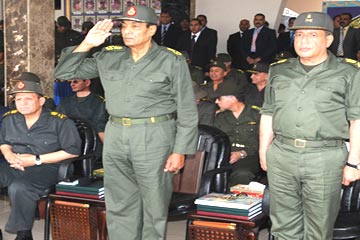 Dear Mr. Marshal,
With great hope Egypt is going to achieve the objectives of the revolution of our youth of 25 January which became a global event, a part of the studies of the history of people revolutions, and also a reference to Egyptian patriotism. The aim of this revolution was to realize the important principles, particularly justice and equality, and to transform Egypt into a civil-state for all its citizens.
Yet despite these opportunities, a dense mist appears and could spoil this great revolution. A climate of fear manipulated by the bats of obscurantism is currently felt by many Copts who represent an important segment of this nation, and a strong partner in the decision-making in Egypt.
The Salafis are now coming-in and becoming more dangerous than any other political or religious movement. Your non-clarified position towards what is happening now to the Copts in Egypt, is even worst. They are in the bitterness and sadness because of repeated incidents which seem to become a custom. Their monasteries, churches and their own lives are attacked. Some are seeking to apply the "law of Sharia" throwing out the window the practiced civil law, developing and inviting the Christians to leave their land and emigrate to Canada and USA. Others have turned the constitutional rights to a religious and political conquest as shown below:
1. Demolition and destruction of the "Church of the Two Martyrs" in Sool at Atfih. Although the authors are known, photographed and their names documented, you have not stopped them
2.Your decision and that of the judge, taken after one week to rebuild the church at the expenses of the Armed Forces could not be implemented until after the visit of a Grand Salafist Imam.  He had to think about for two days, and then he declared his "fatwa" permitting to rebuild the church. He did not find any criminal act that requires bringing to justice those who committed this destruction, with the pretext practicing "magic” in the church. The failure of starting the reconstruction work before the issuance of a Fatwa, leads us to believe that we must now refer to the "Salafi Fatwas" and not military decisions.
3. The Salafis have cut an ear of a Copt in the town of Qena. His name is Mr. Ayman Dimetri. They dared to notify the police that they had put into practice the "Sharia law" because he housed girls that misbehaved. This means they have forfeited the authority of the Attorney General or the Military Commander and have replaced themselves the laws practiced in the country by their religious laws. They were not arrested.
4.A Salafist Imam ascended the pulpit of a mosque at Imbaba, and said that the referendum which just took place represents a religious conquest and he named it "the invasion of the voting boxes." He urged the Copts to leave the country if they are not satisfied with the results of this invasion and gathered followers and supporters. The Military Council has not arrested him for committing a breach of the electoral law which prohibits mixing religion with politics.
5.Despite the death of eleven Christians in the region of Mokattam, so far none of the perpetrators has been brought to justice
6.The attack on the monastery of Saint Bishoy and its peaceful monks led to remove the kidney or spleen of some of the injured and to retrieve a ball from the chest of one of the monks. Despite our complaints raised with the Attorney General Military, nothing happened until today.
7.The attack by the military against peaceful demonstrators in Maspero is to be condemned. They came to this place only to express their anger of the destruction and demolition of their houses of worship. Their requirements and demands are legitimate.
8.Despite everything mentioned above, we expect every day your judgments on terrorists and thugs. It seems that the suffering of the Copts is another issue to be examined later.
Some of the Salafis and the Muslim Brotherhood consider the Copts as "Dhimmis" and not as full citizens. Given these findings and of the lack of a statement from Supreme Military Council, I draw your attention to the suffering inflicted on the Copts and the injustices that exceed those of the former regime.
We are concerned about the future of this nation that has its roots in Egypt, the country with the blood of Muslims and Christians mixed in their land.
Tweet
Author