The Salafis humble the State? 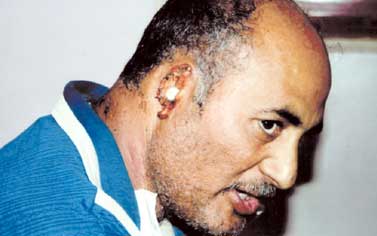 Egypt in its entirety stood horrified a few days ago at the Salafis in the southern town of Qena, who challenged the authority of the State and the rule of law and enforced hudoud (Islamic penalty) on a Copt. Basing on what they claimed to be allegations of sexual immorality, they cut his ear and burned his home and car. Never mind that the allegations were groundless. Stunned by the horrific crime, the nation questioned how dare some group hijack State authority and assign itself the combined roles of jury, judge and executioner? How come the State apparatuses were not able to prevent this crime? And why did they not bring the culprits to justice? And, even much worse, who stands behind the second crime, that of forging a ‘reconciliation’ between the victim and his attacker, in the course of which the victim had to relinquish all his legal rights? As I see it, this was nothing short of a reward to the attacker, a gross offence to the victim and a severe blow to the rule of law and the civil State.

The crime reads like the most heinous imaginable: a group of people level unfounded charges at an individual; move swiftly to convict him; turn their back on security apparatuses and the judiciary; and execute the penalty they decree—one denied and condemned by Muslim clerics—against the victim. Done, they call the police and say they have passed divine judgement and are leaving the matter of earthly judgement to the authorities.
The press handling of the incident was enough to drive any rational person, defender of the civil State, or believer in the 25 January revolution to their wits ends. The headlines celebrated the alleged courageous endeavours of the State officials who forged the reconciliation session. Newspapers splashed photographs and detailed reports on the proceedings of the session, headed by Colonel Ahmed Masoud, deputy military ruler in Qena. Following is a sample of what was printed on the calamitous session:
• An official was quoted to have said that the reconciliation session was held on grounds that it was a civil rather than a sectarian incident. The false claim deals a blow to every honourable Egyptian, since it attempts to justify the coerced reconciliation which insulted the victim and rewarded the offenders. Ironically, the papers called the event “reconciliation among disputants ”.
• Colonel Masoud said he was eager to attend the session to bridge the gap between the disputants’ viewpoints and fold the page on the incident, since the two parties wished that the minor incident should be granted no more weight than it warranted. The deputy military ruler, the highest-ranking official in the region, talks as if we are before negotiations between two parties with divergent views, no more and no less. And he deigns to “bridge the gap between the disputants viewpoints”! What viewpoint is he talking about: That of the criminals who cut the victim’s ear and burned his home and car, or that of the victim who experienced such agony? Then he says the objective of the session was to “fold the page on the incident”. Such a declaration is, by all measures, calamitous. He claims the two parties wish that the minor incident should be granted no more weight than it warrants”. Small incident! The words insult our intelligence, deny the truth, and deal a blow to the rule of law.
• Al-Husseini Kamal, who attended the reconciliation session and is a member of the Salafi group that committed the crime, said that: “the relationship between Salafis and Copts is one of eternal compassion; Copts are part of this nation; and what happened was no more than a storm in a teacup.” What eternal compassion between the two partners in a homeland can lead one of them to treat the other in the most savage manner imaginable, then exchange niceties with him before TV cameras to claim that it was all no more than “a storm in a teacup?” Mr Ayman Mitry, the victim, said he had to accept to reconcile in order to protect his family of any vengeance had he decided otherwise.
More calamitous than the heinous crime is the attitude of the State. The authority and respect of the State is now at stake. What will the State officials do to restore the prestige of the State shattered so ruthlessly by the Salafis? The public prosecutor has issued an order to catch and arrest those who planned and committed the crime. Will they really be brought to justice? The authority of the State now hangs on how this episode is concluded.
A final word, whatever happened to those who carried out the brutal attack against the church in Etfeeh last month?  They too should have been brought to justice.
Tweet
Pope Shenouda Article