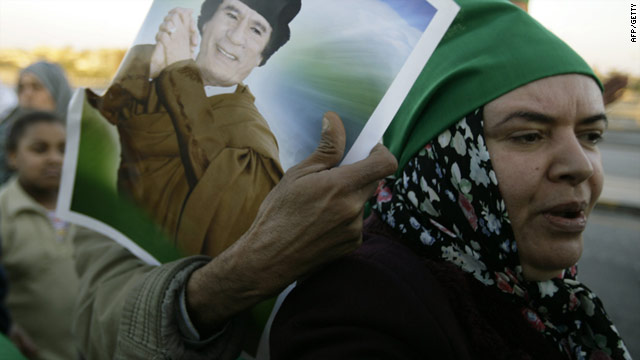 Tripoli, Libya (CNN) -- African leaders were meeting Saturday in an attempt to end Libya's impasse, bloody again as advancing forces loyal to Moammar Gadhafi attacked Ajdabiya, the eastern city where the opposition had reveled in victory just two weeks ago.

The African Union's special committee on Libya -- represented by Mauritania, Congo Republic, Mali, Uganda and South Africa -- was convening in Mauritania and will travel to the Libyan rebel stronghold of Benghazi to meet with the opposition leaders Sunday and Monday, according to the South African government.
The South African government also said NATO has granted the committee permission to meet with embattled ruler Moammar Gadhafi in the Libyan capital, Tripoli.
Gadhafi has been a big supporter of the African Union and has channeled large sums of money its way. Libya also holds a seat on the 15-member Peace and Security Council. As such, opposition leaders in Benghazi did not express optimism over the success of mediation.
The United Nations said Secretary-General Ban Ki-moon will travel to Cairo, Egypt next Thursday to head meetings on Libya at the Arab League headquarters. Among the participants will be Catherine Ashton, the representative for foreign affairs and security for the European Union.
Libya's state-run television, meanwhile, aired images of a fist-pumping Gadhafi visiting what appeared to be a primary school in Tripoli. The anchor said the school was a target of international airstrikes and was going to be attacked.
Former U.S. lawmaker Curt Weldon visited Libya this week hoping to speak directly with Gadhafi but left without a meeting. He did manage to secure a letter from the strongman to U.S. Secretary of State Hillary Clinton.
"I am disappointed that I did not get to sit down face to face with Colonel Gadhafi as promised, but I may have been able to get something even more significant -- a path to a resolution of this conflict," Weldon said in a statement on his departure.
Weldon visited Libya in 2004 when he was a Republican congressman from Pennsylvania and said he was invited this time by Gadhafi.
Amid the attempts at diplomacy, Libya's war raged on the ground.
In the back-and-forth battle for Ajdabiya, Gadhafi's forces attacked with a barrage of artillery fire at the city's western gates, forcing rebels to retreat.
Street fighting erupted as the loyalists, aided by sympathizers, entered the city and the opposition fighters appeared to have all but lost again territory that was hard won.
At the height of their march toward Tripoli, rebels came within 40 kilometers (25 miles) of Sirte -- Gadhafi's hometown in western Libya. But loyalist forces have steadily pushed the rebels back and now stand poised to run down the highway to Benghazi, the opposition's capital.
Burnt carcasses of Libyan army tanks taken out by coalition aircraft three weeks ago litter the road. But it's increasingly harder to distinguish pro-Gadhafi troops. They have changed tactics and have taken to moving about in civilian vehicles.
Men holding a light defense in Ajdabiya said they were fighting a formidable foe.
"The troops of Gadhafi have good weapons and have training and have leadership and have experience," one rebel fighter said.
Tweet
Pope Shenouda Article