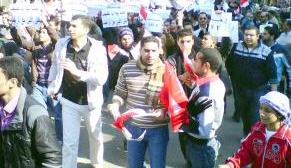 CAIRO - Should the nation be allowed to sit in the public gallery during the trial of the toppled President, Hosni Mubarak, and his family, for large-size scams and making ill-gotten gains?

Millions of Egyptian people, victims of Mubarak's 30 years of tyrannical rule, are now asking this question. Legal sources have suggested that Mubarak should be tried behind closed doors for his own safety.
Since being ousted on February 11, Mubarak has been caged in his favourite retreat in Sharm el-Sheikh.
The nation was angry when television crews and photojournalists were banned from covering the trials of Mubarak's close associates, accused of ordering the killing of demonstrators during the uprising and of abusing power.
Appreciating the public discontent, influential Muslim clerics are campaigning for these trials to be aired live.
Describing the Mubarak regime as dictatorial and oppressive, the Muslim clerics say that the suspects, led by the former President, stole the people's wealth, hijacked their future and corrupted political life.
The trial in public of Mubarak and his cronies is said to be a legitimate, national demand. The Supreme Council of the Armed Forces (SCAF), which is ruling Egypt until parliamentary and presidential elections take place, has been urged to allow this to happen.
Prof Mohamed el-Sayed el-Gelend from Cairo University is confident that the SCAF is committed to its huge national task.
“The Army will bring everyone, irrespective of their former position or power, to trial. The people's money, which was robbed by these corrupt officials, will come back,” he stresses.
But the professor fears that Mubarak's associates, who remain untouched, are conspiring to avenge themselves on the nation.
“It is unacceptable that, although Mubarak's corrupt, dictatorial regime has crumbled, its cronies are still stirring up trouble here and there,” says el-Gelend, accusing these elements of opening the gates of the nation's prisons in the early days of the revolution, allowing the inmates out to terrorise the people.
“The mysterious disappearance of the police from the nation's streets was also treacherously orchestrated by powerful cronies of Mubarak, who remain at large.
“The intelligentsia and political activists won't allow the former President and his associates to get away with their crimes.
Members of Mubarak's toppled regime shouldn't be tried by military courts. These criminals should stand before judges to guarantee that their trials are fair.”
He would like the nation to sit in the public gallery in court or to follow proceedings on TV, to make sure that the former dictator and his cronies pay for their crimes.
A prominent Muslim thinker describes corruption under Mubarak as “astonishing and unprecedented”.
“The crimes committed by Mubarak and his cronies over the past three decades have piqued the world's curiosity. These criminals have robbed the people of everything,” Prof el-Sayed el-Gemeli adds.
Like el-Gelend, Prof Abdel-Moeti Bayoumi, a member of the Complex of Islamic Research and a celebrated Muslim philosopher and preacher, believes they should be tried in public.
“According to Islam, justice prevails when criminals and corrupt elements are tried in public and everyone is given the opportunity to witness the proceedings,” Bayoumi comments.
Tweet
Pope Shenouda Article