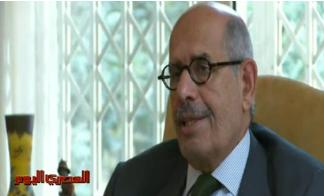 Egyptian reformist Mohamed ElBaradei has returned to Cairo. This time, he will not call for change or civil disobedience against former President Hosni Mubarak’s regime, but instead present himself to the Egyptian people as a presidential candidate. In an interview with Al-Masry Al-Youm, ElBaradei justified his frequent absences from Egypt. He said the only way to communicate his message -- that change is in the hands of the Egyptian people -- was by travel, since Egyptian television channels banned his appearance. He called for Mubarak to stand trial, saying that Egypt will remain ill as long as the former president's situation remains ambiguous. He went on to say that he never had a passport from a foreign country and that his wife is Egyptian.