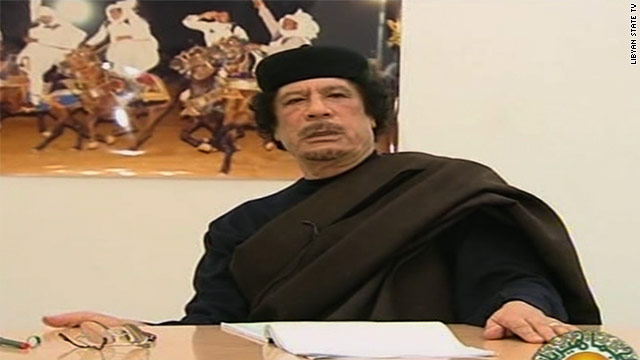 Tripoli, Libya (CNN) -- Libyan leader Moammar Gadhafi on Saturday urged NATO to negotiate an end to airstrikes, accusing the international coalition of killing civilians and destroying the nation's infrastructure in a bid to take over its oil production.

"Come and negotiate with us. You are the ones attacking us. You are the ones terrifying our kids and destroying our infrastructure. You American, French and British come and negotiate with us," Gadhafi said during a rambling 45-minute address on Libyan state TV.
It was a rare appearance for the leader, who has not been seen in public since international forces began bombing regime targets last month.
The airstrikes started after the U.N. Security Council approved a resolution authorizing any means necessary to protect civilians demanding the ouster of the ruler, who has been in power for nearly 42 years.
From the time NATO began its operation on March 31, the organization had conducted 4,398 sorties, of which 1,821 were strike sorties, according to an update issued Saturday. Facilities in or around Tripoli, Zintan, al-Brega and Sirte were targeted on Friday, it said.
At times, Gadhafi's address appeared to be a tirade against NATO and the United Nations.
"What are you trying to do? Trying to take the oil?" he said. "The Libyan people will not allow you ... The oil is under control of the Libyan government and for the people."
He called on the United Nations to review the NATO attacks, saying his country agreed to a cease-fire.
"We are the first ones who wanted and agreed on a cease-fire. But the NATO crusader airstrike did not cease," he said. "It cannot be a cease-fire from one side."
A NATO spokeswoman called for actions, not words shortly after Gadhafi's address.
"The regime has announced ceasefires several times before and continued attacking cities and civilians," NATO deputy spokeswoman Carmen Romero said in a statement.
"Just hours before colonel Qhadafi spoke of a truce, his forces indiscriminately shelled Misrata, killing many people, including children. His forces tried to mine the port to block the access of humanitarian aid to the beleaguered civilians of Misrata. All this has to stop, and it has to stop now."
A spokesman for the Libyan opposition accused Gadhafi of lying and trying to play both sides.
"He's playing both parts. He's buying time at the same time projecting himself as somebody who's trying to find a solution to this problem, while the reality on the ground is he is the one who's seeking to kill and carry out all kind of crimes against the Libyan people," said Jalal al Gallal.
"The man has no credibility anymore," he added.
Gadhafi took to the airwaves after his government threatened to sink any ship approaching the besieged port city of Misrata. The declaration essentially threatens NATO patrols and humanitarian aid ships that have been bringing in food and medical supplies, and ferrying out refugees and the wounded.
The government threat came shortly after NATO said it intercepted government forces laying mines in Misrata's harbor, which has been a lifeline for humanitarian aid.
It also came as Gadhafi's forces were shelling Misrata in an attempt to re-enter the city after being pushed out by rebels. Misrata, the country's third-largest city, has been hemmed in on three sides for weeks by Gadhafi's forces, leaving the sea as the only escape route.
At least nine people were killed and 30 more wounded in Friday's attacks in Misrata, said a doctor, who is a member of the medical committee in the city.
"There is an indiscriminate shelling now in Misrata," said the doctor, who asked not to be identified because he feared retribution by Gadhafi's forces.
Meanwhile, Libyan state TV announced that the military had successfully suppressed operations of the port.
"We will not allow any ship to dock at the port without being inspected by the Libyan government," said Musa Ibrahim, a government spokesman.
He said any aid to Misrata must be delivered through designated land routes.
Opposition spokesman al Gallal said reports of a government takeover of the port were untrue and that rebels are still in control of operations there.
CNN's Frederik Pleitgen, Kareem Khadder and Saad Abedine contributed to this report.
Tweet
Pope Shenouda Article