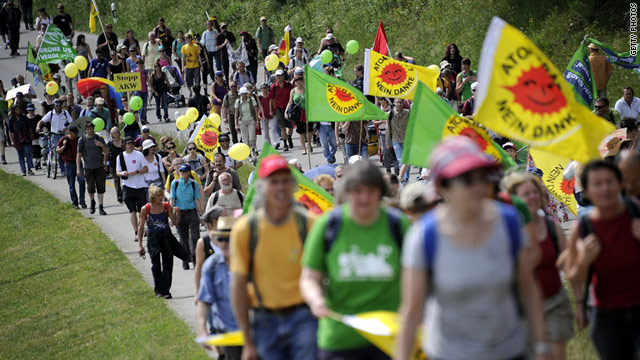 (CNN) -- Germany's ruling coalition has agreed to shut down all of the nation's nuclear power plants by 2022.

Minister of Ecology Norbert Roettgen of the Christian Democratic Union party made the announcement early Monday after negotiations with coalition partner, the Liberal Party, which had been opposed to setting a date for decommissioning the nuclear facilities.
Opposition parties have long supported shuttering nuclear energy in Germany
"The decision looks like this," Roettgen said. "Seven older nuclear power plants ... and the nuclear plant Kruemmel will not go back online ... a second group of six nuclear reactors will go offline at the end of 2021 at the latest, and ... the three most modern, newest nuclear plants will go offline in 2022 at the latest."
To make up for the loss of nuclear energy, the German government will begin to switch to renewable energy and increase investments in energy research, the government website says.
"But we will not be able to do without conventional power plants, above all cutting-edge gas power plants for a long time," said a statement published last week. "New fruits of new research should contribute to making the energy transition more efficient and easier on the ecology."
In March, German Chancellor Angela Merkel announced she would rethink a plan to extend the lifespan of her country's nuclear power plants.
"The events in Japan have shown us that even things that seem all but impossible scientifically can in fact happen," Merkel said at a Berlin news conference.
Japan's Fukushima Daiichi nuclear plant was damaged in a March 11 earthquake and tsunami, which has spewed large amounts of radiation into the environment.
At the time, Merkel ordered a review of the nuclear plant safety standards, saying there would be "no taboos in those reviews."
Tweet
Pope Shenouda Article