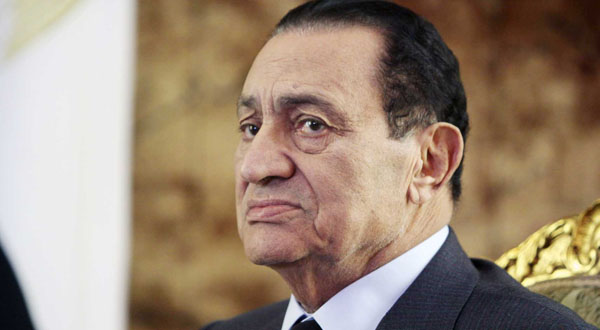 CAIRO: The interrogation of ousted president Hosni Mubarak was reportedly interrupted three times after he broke out in tears when questioned on charges of killing protesters, misuse of power and profiteering.

According to press reports, Mubarak denied that he had any information about the killing of protesters in the early days of the January 25 Revolution.
He claimed to have been told that only thugs and police officers were killed during attempts to break into police stations, according to official reports from the interior ministry.
He added that he only followed the accounts of international news agencies on the uprising, which supported the interior ministry’s reports shown to him.
He also claimed to have told ex-Interior Minister El-Adly and other ministry officials to exercise “restraint” and calmly deal with protesters on Jan. 25.
Violent clashes between security forces and demonstrators left at least 846 dead and over 6,000 injured, according to an official report by a fact-finding mission.
Mubarak further denied accepting gifts as president, namely a palace and four villas in Sharm El-Sheikh worth LE 40 million, in return for symbolic amounts of money to facilitate businessman Hussein Salem’s ownership of millions of meters of state-owned land in South Sinai.
He claimed that he spent LE 500,000 from his own money to buy one of the villas. The prosecution proved that the villa was worth LE 24.5 million at the time it was purchased.
Prosecutor General Abdel Meguid Mahmoud referred Mubarak last week to the Cairo Criminal Court over corruption charges and being involved in killing and injuring protesters during the first days of the January 25 Revolution.
In related news, the interrogation of Mubarak’s sons Gamal and Alaa for illicit gains and misuse of power were postponed until Monday, because their lawyer Farid El-Deeb was not available.
El-Deeb was representing Elham Sharshar, journalist and wife of El-Adly, with regards to charges of making illicit gains.
Sharshar was released pending investigations.
On April 13, Mubarak and his two sons Gamal and Alaa were detained pending investigations into charges of corruption, profiteering, misuse of power and public funds and the acquisition of commissions for facilitating business deals.
The two sons, who had been living in the Red Sea resort of Sharm El-Sheikh since Mubarak stepped down on Feb. 11, were taken to Tora prison in Cairo while the former president remained in Sharm El-Sheikh International Hospital under heavy security for medical reasons.
Mubarak and his family were previously banned from travel and placed under house arrest by the Prosecutor General and had their accounts and properties frozen inside and outside Egypt.
Tweet
Pope Shenouda Article