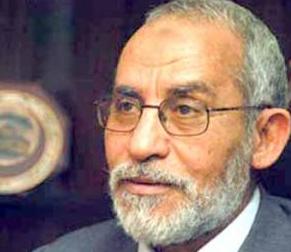 The only way to avoid oppression is to attain power. This what the Muslim Brotherhood has learned from history. The overwhelming presence of the Brotherhood in the post-Mubarak era reflects their fear of missing an extraordinary opportunity to reconstruct the Egyptian polity in their favor.

After being banned for more than sixty years, the Brotherhood seeks not only to get official recognition, which effectively happened when former Vice President Omar Suleiman invited them for a dialogue just before Hosni Mubarak’s ouster. More importantly, the group wants to become a key player in shaping the new political system in Egypt.
A few days ago, Supreme Guide Mohamed Badie inaugurated the new Brotherhood headquarter at a large ceremony attended by public figures from all over Arab and Muslim World and covered by local and international media. Moving from a humble two-floor apartment in a Nile-side suburb to a grand villa in Moqattam, one of the largest compounds in the Cairo neighborhood, exemplifies the Brotherhood’s move from marginalization and secrecy towards openness and power sharing. Brotherhood leaders now speak with a tone that reflects a new sense of empowerment and importance.
With the official dissolution of the former ruling National Democratic Party by the Supreme Administrative court last April, the only force that can fill the vacuum left behind is the Muslim Brotherhood. Their leaders are evoking the rhetoric and strategies of the movement's founder, Hassan al-Banna, with the aim of establishing an Islamic state. Al-Banna laid out a sequence of three stages to achieve this goal: the popular diffusion Brotherhood doctrine, empowerment (Tamkin), and implementation (Tanfiz). Khairat al-Shater, a Brotherhood veteran and its organizational architect, has recently asserted that the Brotherhood is in the second stage and moving steadily towards the third. Other Brotherhood leaders have echoed this assessment since the ouster of Mubarak in February.
In addition to the movement’s territorial and social expansion in the post-Mubarak era, the Brotherhood is preparing to dominate the Egyptian parliament after the elections next September. It has decided to contest 50 percent of the seats, though they’re expected to win up to 30 or 40 percent. Many years of campaign and negotiation experience put the Brotherhood in a privileged position to win a substantial victory in September. Moreover, if Salafis decide to participate they are likely to ally with the Brotherhood to ensure the Islamist character of Egypt’s new constitution.
The Brotherhood will play all its cards to secure a plurality if not a clear majority in the next parliament. More significantly, it's proposing a unified candidates list that would encompass all political factions to contest the elections. If this happens, the Brotherhood will certainly have a strong influence on the new government.
Moving forward, the crucial question is whether the Brotherhood is ready to rule the oldest and largest country in the Middle East. Several of their leaders have signaled the group’s hope to become a kingmaker in the next government. Essam al-Erian, the deputy head of the Brotherhood’s newly formed Freedom and Justice Party, recently said in a TV appearance that the Brotherhood is preparing to resolve all Egypt’s problems through a unified government, adding that the group has plans for dealing with unemployment, healthcare and education. More significantly, Sobhy Saleh, the prominent Brotherhood leader and former MP has said that the next Egyptian government will be an Islamic one.
But like other Islamists in Turkey, Algeria, Jordan, and Yemen who have formed coalition governments over the past two decades, the Brotherhood will have to make enormous concessions to guarantee public support in the new government. First, the movement will have to change its political and ideological discourse to become more open and progressive, a move required to bring it in line with the new revolutionary mood in Egypt. This is unlikely to happen with the conservative hawks still dominating the movement. Second, the Brotherhood will have to bargain with the Supreme Council of the Armed Forces, the incumbent ruler of Egypt, over the shape of the state and the future role of the military in politics. Third, the Brotherhood will have to modify its position towards Israel into one that is more practical and in touch with present realities.
Making these concessions might lead to serious problems within the movement, like internal fragmentation and possible schisms. But without them the Brotherhood may have considerable trouble running Egypt’s next government.
Tweet
Pope Shenouda Article