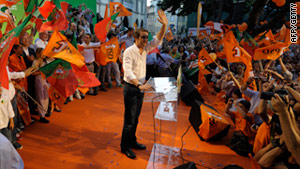 (CNN) -- Voters in Portugal head to the polls Sunday after months of a caretaker government and financial woes that sparked a request for an international bailout.

The early election was triggered by the resignation of Socialist Prime Minister Jose Socrates in March after the country's parliament rejected his austerity plan intended to ease the financial crisis.
Opposition parties voted down the plan, which they said hurts the poor.
Socrates, who had threatened to resign if the plan failed, said the opposition decision hurts the country. He now serves as a caretaker prime minister.
"The obstruction from the opposition ... was taken to intolerable levels." Socrates said at the time. "It wasn't just about obstructing the government, it was about obstructing the country."
The defeated plan was the latest in a series of austerity measures aimed at resolving Portugal's financial crisis after it admitted it needed help.
In April, the Portuguese government, led by Socrates, said it had submitted an application for aid to the European Commission.
It joined other countries, including Greece and Ireland, that have required bailouts.
Socrates said the request for outside help was a last resort.
"I think we have reached the moment whereby not taking this decision would bring further risks that the country should not face," he said.
Socrates' admission came just hours after the government was forced to pay a huge premium to borrow short term cash, ratcheting up the pressure on its finances.
The cost of Portugal's borrowings has gone up drastically since Socrates resigned in March.
Portugal was due to repay more than E4 billion ($5.68 billion) to investors in April, followed by payments of almost E5 billion mid-June.
The June repayments are considered a pressure point with the added complication of the snap election Sunday.
Pedro Passos Coelho, the leader of the Social Democratic Party, is slightly ahead of Socrates in the latest poll.
Tweet
Pope Shenouda Article