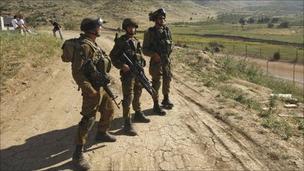 Israeli soldiers have opened fired on pro-Palestinian protesters in Syria as they marched on the Israeli-occupied Golan Heights.

Israel had vowed to prevent a repeat of a similar march last month, in which hundreds of people had managed to breach the border fence.
Witnesses said several people appeared to have been injured. Syrian state TV said four people had died.
The protesters were marking the 44th anniversary of the 1967 Mid-East war.
Earlier, Israeli Prime Minister Benjamin Netanyahu said he would not allow "extremists" to breach Israel's borders.
"I have instructed our security forces to act with determination and restraint in order to protect our sovereignty our borders, towns and citizens," he said at the weekly cabinet meeting in Jerusalem.
But this did not deter several hundred demonstrators from moving on the razor-wired fencing and freshly dug trenches close to the frontier village of Majdal Shams in the Golan Heights at around noon.
Many carried Palestinian flags and threw rocks and rubbish over the fence, the Associated Press reports.
Israel's military said its soldiers shouted warnings in Arab at the protesters and fired warning shots in the air, before aiming at the legs of those who had reached the fence.
Israel seized the Golan Heights from Syria in the closing stages of the 1967 war, along with the West Bank, Gaza and East Jerusalem. The anniversary is known in Arabic as the Naksa, or "setback".
On 15 May, tens of thousands of pro-Palestinian demonstrators marched on the borders with Israel, in the Palestinian territories, Syria, Jordan and Lebanon.
They were marking the 63rd anniversary of Nakba, which in Arabic means "catastrophe" - when hundreds of thousands of Palestinians lost their homes amid the fighting after the creation of the state of Israel in 1948.
At least 12 people were killed by Israeli soldiers during the 15 May demonstrations, which at one point saw hundreds manage to cross into the Golan Heights.
Tweet
Pope Shenouda Article