Egypt says about to close $3 bln IMF accord 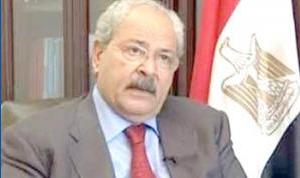 CAIRO - Finance Minister Samir Radwan said on Sunday Egypt was on the verge of concluding a $3 billion standby financing arrangement with the International Monetary Fund (IMF) but was still working out some of the terms.

Egypt has been seeking funds to plug an estimated $10-12 billion balance of payments gap in the wake of a political upheaval that toppled the government in February.
Radwan said the IMF funds would be disbursed quarterly under a 12-month agreement, but that Egypt was asking that a large portion of the funds be delivered early.
"We are asking that an important part of it be loaded up front," Radwan said by telephone.
Egypt was also discussing interest rates and the repayment period of the borrowed funds, he added.
IMF standby arrangements typically stipulate repayment within 3-1/4 to 5 years.
"We are about to conclude the agreement. We are having a big meeting this afternoon" to work out final terms, Radwan said.
An IMF delegation that has been in Egypt for two weeks to negotiate the agreement had been due to leave the country on Sunday, and Radwan said last week he hoped to conclude a deal by
then.
Cairo has been asking international donors and lenders for funding help after protests that ended President Hosni Mubarak's 30-year rule scared away tourists and investors, two of its main sources of foreign exchange.
The crisis has cut into the government's revenue from taxes at a time of increasing demands on expenditure, which include calls for higher wages from state employees and pressure to raise subsidies on basic commodities.
Any agreement would have to be submitted to the IMF board and to Egypt's cabinet and its ruling military council before it came into effect, Radwan said.
The yield on a 10-year US dollar-denominated Egyptian government bond that matures in April 2020 was at its lowest since mid-January , reflecting improved investor confidence in Egypt's state finances.
Tweet
Pope Shenouda Article