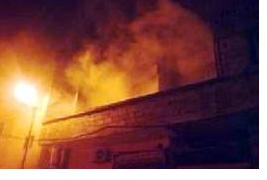 (AINA) -- Hundreds of Muslims surrounded the church of St George today in the village of Beni Ahmed West, 7 KM south of Minya, vowing to kill its priest Father George Thabet, who was serving the morning mass and was locked in the church with a number of parishioners. Security forces arrived five hours later and escorted Father George in a police car to the Coptic Diocese in Minya. "Father George looked as if he was the criminal, leaving his church in a police car." said one of the eye-witnesses. The Coptic youth who were attending mass remained inside church to defend it from Muslim attacks.

Eyewitnesses reported the Muslim mob, in their white dresses and long beards, chanted "We will kill the priest, we will kill him and no one will prevent us." One of their leaders said that they will "…cut him to pieces."
It was reported that no police or security of any kind was present during the events.
The attacks on St. George Church trace back to March 23, 2011, when Muslims had surrounded the 100-year old church, which held a renovation license, and ordered the church officials to stop construction immediately and undo what they had completed, otherwise they would demolish the church after Friday prayers. They had placed several demands on the church authorities, including the banning of Father George Thabet from Beni Ahmad village and gave him a time limit of 35 days, later extended to 50 days, to leave the village with his family. Muslims accused him of making extensions to the church and of causing sectarian strife. The Archbishop of Minya had sent a priest two months ago to assist Father George, in order to diffuse the situation, but the Muslims resumed their pressure on the church (AINA 4-9-2011).
Muslims started congregating near the church in small numbers since the evening of June 21, after learning that Father George is returning to the village. It is believed they were angry and wanted to kill him because he defied the ban they placed on him.
The archdiocese of Minya issued today a statement formally reiterating its strong dissatisfaction with the incident and denouncing the "return of the Salafists to besiege St. George's church again, some carrying weapons, threatening to kill the priest unless he leaves the village."
The statement rejected the interference in church affairs, saying the issue of care of the church is the responsibility of the church authorities alone, and not of any person or group. It called on government officials and security authorities to do their part in upholding the rule of law and maintaining security in the country.
The archdiocese refused any preconditions to negotiate with political and security officials, demanding the security forces disperse the demonstrations before any negotiations can take place.
After Father George left the church the Muslim mob remained until security arrived to disperse them. The Muslims threatened that if they do not hear from the military commander by tonight that the priest is banned from returning to the village, they will hold their Friday prayers tomorrow, June 24, inside St. George's church.
Tweet
Pope Shenouda Article