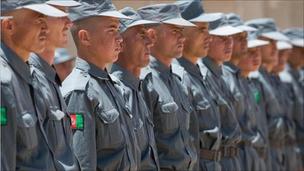 Nato has handed over control of the central Afghan province of Bamiyan to Afghan security forces.

It is the first of seven areas to be passed to local forces under a plan announced by President Karzai in March.
Bamiyan is one of the country's most secure provinces but it is a poor region, heavily reliant on foreign aid.
The handover is seen as a critical step in a transition of power before foreign troops end combat operations in 2014.
Senior Afghan ministers and foreign ambassadors flew down from the capital, Kabul to take part in a transition ceremony that for security reasons was not announced in advance and was not broadcast live.
The ceremony was held at Bamiyan's police headquarters. The police will take responsibility for security in the province as there are no army units stationed there.
International forces from New Zealand will remain in the area for the time being, but they will be under Afghan control.
Local fears
Six areas are still to be handed over to Afghan forces in this first phase of the transition. They include:
Kabul province
Panjshir province
Herat city
Mazar-e Sharif city
Lashkar Gah city
Mehtar Lam town
The greatest challenge for Afghan forces is likely to be faced in Lashkar Gah, the capital of volatile Helmand province in the south where Taliban insurgents remain active.
On Saturday a British soldier was killed near Lashkar Gah while on patrol with the Afghan army - reports suggest that he might have been shot by a man in an Afghan army uniform.
And just weeks after President Karzai's announcement in March, seven UN staff were killed during a deadly protest in Mazar-e Sharif in northern Afghanistan.
The BBC's Jonathan Beale, in Bamiyan, says that if the transition here does not work well, it is hard to see it taking root in less secure parts of the country.
But local officials were optimistic, pointing out that Bamiyan has not been badly affected by the Taliban offensive over the years.
"The transition process has officially began in Bamiyan today and this is a national process we have been waiting for," Abdulrahman Ahmadi, spokesman for Bamiyan's governor, is quoted as saying by the Reuters news agency.
Bamiyan still has many problems with around 50% of the population not getting enough food to eat. Many Afghans who live here are worried that transition will mean more corruption, less employment and less security, our correspondent says.
Taliban offensive
At the time of the initial handover announcement, Nato Secretary General Anders Fogh Rasmussen said that every step of the transition would be "determined by conditions on the ground."
Correspondents say that despite rising casualty numbers, the surge of extra American troops and tens of thousands of new Afghan police and soldiers have improved security in a number of areas in the country.
However the quality of Afghan police and soldiers is patchy and correspondents warn of fears that they will be unable to withstand a renewed summer offensive from the Taliban.
There have been a number of high-profile attacks in the country including an assault by militants on a luxury hotel in Kabul that left 22 people dead. On Tuesday, President Karzai's half-brother was shot dead in Kandahar by his own head of security.
This is the first step in a long process of withdrawal, after which the primary role of foreign troops will be to train and equip Afghan security forces. Nato troops will cease to engage in battle.
There are currently around 140,000 foreign troops in Afghanistan, nearly 100,000 of whom are from the US, still battling the Taliban insurgency.
Tweet
Pope Shenouda Article