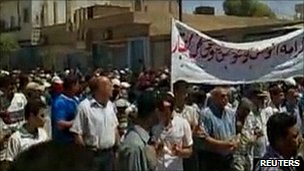 Saudi Arabia has said it is recalling its ambassador from Damascus in protest against Syria's deadly crackdown on anti-government demonstrators.

A statement from King Abdullah said the violence was "unacceptable" and called for it to stop before it was too late.
It came hours after the Arab League issued its first official statement, strongly condemning the violence.
On Sunday, more than 80 people died as the army launched assaults in eastern and central Syria, activists said.
They said at least 50 died when soldiers, backed by scores of tanks and armoured vehicles, stormed Deir al-Zour during the dawn call to prayer.
A man living in the city told the BBC the tanks had been withdrawn from the eastern city, but that residents feared they would come back.
Twenty-six others were killed in Hula, near the city of Homs, including a 10-year-old boy. Deaths were also reported in Idlib in the north-west.
The Local Co-ordination Committees, an activist group that documents and organises protests, said that after sunset, thousands of protesters poured onto the streets in towns and cities, including Damascus and its suburbs, Homs, Aleppo, and Latakia on the Mediterranean coast.
Activists say at least 1,700 civilians have been killed and tens of thousands arrested since the uprising began in mid-March.
Access to Syria has been severely restricted for international journalists and it is rarely possible to verify accounts by witnesses and activists.
'Killing-machine'
In a major escalation in international pressure on President Bashar al-Assad, King Abdullah declared on Sunday evening that his country had taken an historic decision despite all the support it had given Syria in the past.
"Any sane Arab, Muslim or anyone else knows that this has nothing to do with religion, or ethics or morals; spilling the blood of the innocent for any reasons or pretext leads to no path to... hope," he said in a statement broadcast by the Saudi-owned satellite channel, al-Arabiya.
"What is happening in Syria is not acceptable for Saudi Arabia," he added. "There are only two options for Syria's future: either it chooses wisdom on its own, or it will be pulled down into the depths of chaos and loss."
"The kingdom of Saudi Arabia... demands an end to the killing-machine and bloodshed and calls for acts of wisdom before it is too late."
"Syria should think wisely before it is too late and issue and enact reforms that are not merely promises but actual reforms," he concluded.
BBC Middle East correspondent Jon Leyne says the statement seems to be a co-ordinated move, following the Arab League's own communique.
The 22-member league said it was "alarmed" by the situation in the country and called for an immediate end to the violence.
The six-nation Gulf Co-operation Council (GCC) also issued its first comments about the unrest on Saturday, condemning the "excessive use of force" and calling for an "immediate end to the violence".
King Abdullah sent Saudi troops in March to Bahrain as part of a GCC force to help the country's Sunni monarchy crush anti-government protests led by the Shia majority. Saudi officials also criticised the decision to put Egypt's ousted president, Hosni Mubarak, on trial.
Our correspondent says President Assad is now even more isolated.
A US state department official said the Saudi monarch's statement was "another clear sign that the international community, including Syria's neighbours, are repulsed by the brutal actions of the Syrian government".
'Tough' messages
Diplomatic tension with neighbouring Turkey is also rising.
Prime Minister Recep Tayyip Erdogan said on Saturday that Ankara had "run out of patience" with President Assad's regime and that it could no longer "remain a spectator" to events across its border.
He announced that he was sending Foreign Minister Ahmet Davutoglu to Damascus on Tuesday to deliver a "tough message".
But one of Mr Assad's top advisers said he would be given an even tougher message to take home.
UN Secretary-General Ban Ki-moon spoke to President Assad by telephone on Saturday, urging him to stop the use of military force against protesters and to allow humanitarian missions into his country.
Last week the UN Security Council also called on the Syrian leader to stop the violence.
President Assad has insisted that his government is enacting reforms. He blames the violence on "armed terrorist gangs" which he says are backed by foreign powers.
"Syria is on the path to reform," he was quoted as telling Lebanese Foreign Minister Adnan Mansour by the state news agency, Sana.
"To deal with outlaws who cut off roads, seal towns and terrorise residents is a duty of the state, which must defend security and protect the lives of civilians," he added.
Tweet
Pope Shenouda Article