4 dead, 40 hurt after stage at Indiana fair 'snaps like a toothpick' 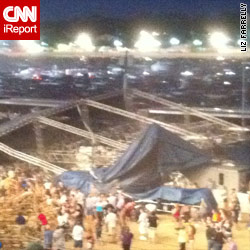 (CNN) -- In a few minutes, the festive mood of a summer concert turned tragic after a massive burst of wind tore down a stage at the Indiana State Fair on Saturday night, killing at least four people and injuring 40.

Authorities said Sunday they feared more casualties.
"A big gust of wind came through. You could see a lot of people panicking," said Aaron Richman, who witnessed the collapse at the Indiana State Fairgrounds in Indianapolis. "All the scaffolding and speakers -- all that came crashing down -- and the whole stand just collapsed."
Allison Hoehn, another concertgoer, said many attendees rushed to those trapped after the stage crumbled.
"We tried to get down to help, but no one was moving," Hoehn said. "The storm came on so fast and the stage just snapped like a toothpick."
A wave of deafening cries echoed across the Hoosier Lottery Grandstand as the stage -- and heaps of metal scaffolding -- fell toward the crowd.
Spectators grabbed parts of their seats to assemble makeshift stretchers, Hoehn said.
"Everyone rushed to help, and we saw people searching and pulling people out," she said. "(I) saw five people go away on stretchers. It was amazing how many people ran in to try to lift the scaffolding."
Crews sifted through the rubble late into the night. Indiana State Police Sgt. Rich Myers said four people had died, and at least 40 were injured.
Just an hour or two before the catastrophe, the sky was sunny, and the mood was light. Attractions such as deep-fried ice cream and midway rides dotted the fairgrounds as throngs gathered to watch country music duo Sugarland and singer Sara Bareilles.
Then, out of nowhere, Hoehn said, the sky turned ominously dark over the Ferris wheel.
"It got really, really windy ... and cold," she said.
Capt. Brad Weaver, commander of special operations for the Indiana State Police, said he took the stage at 8:45 p.m. to warn the audience of severe weather.
Ten minutes later, the wind gust blew through.
The National Weather Service estimated winds between 60 and 70 mph.
Weaver said he "saw the framework from the stage start to come over."
He said he and others took cover behind a trailer, which was also struck by debris from the stage.
Weaver said authorities were in the process of issuing an evacuation order, but Hoehn said no one told the crowd at the concert to evacuate.
Bareilles had finished her set when the wind knocked down the rigging on to the stage.
"I'm speechless and feel so helpless," Bareilles said on her Twitter page. "My heart aches for the lives lost."
Sugarland, the show's headliner, was supposed to take the stage next.
"We are stunned and heartbroken for the fans and their families in Indiana," Sugarland singer Jennifer Nettles said in a statement. "We hold those injured in our prayers at this very sad time. There are no words. It is tragic."
Sugarland and Bareilles have cancelled their Sunday evening show at the Iowa State Fair, according to the Iowa State Fair website.
The official Twitter page of the Indiana State Fair said officials would announce updates "as they come." The fair will be closed on Sunday, police said.
Earlier this month, severe weather caused a stage to collapse before a Flaming Lips performance in Oklahoma.
The August 6 incident occurred after heavy winds and rain pounded Tulsa, ending a block party music festival that featured Primus, the Flaming Lips and other acts. A lighting rig fell down and struck audio equipment and instruments. It was unclear whether there were any injuries.
And last month, a severe storm toppled a stage when classic rock band Cheap Trick was performing. No one was seriously hurt during the incident at the Cisco Ottawa Bluesfest in Canada.
The Indiana State Fair, now in its 159th year, began in 1852 after the state's general assembly passed an act to "encourage agriculture."
Many famous acts have performed at the fair through the years, including Bruce Springsteen, Kanye West and Garth Brooks. In 1964, the Beatles performed two sold-out shows to an audience of almost 30,000.
Tweet
Pope Shenouda Article