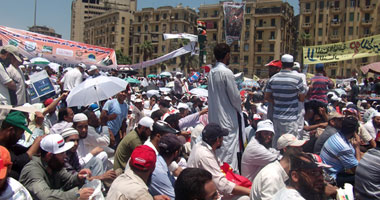 It goes to the credit of the Islamists, including the Salafis, that Tahrir Square’s 29 July “Friday of popular will and unity” was effectively, and deliberately, transformed into a “Friday of hijacking popular will and dividing ranks”. Despite prior agreement among 38 factions from across the political spectrum to join forces and unify ranks, Islamists took everyone aback when they reneged on their promise and exclusively controlled the square with clamorous voices and divisive slogans. I say “deliberately” because it is hard for any rational individual to believe the Salafi leaders attempt to explain it all off by claiming they found it impossible to control the crowds they had brought into the square. Such naive allegations contradict all obvious evidence as well as the course of events. Everything was organised to the utmost precision: the religious slogans chanted, the racial flags raised and the statement distributed.  There can be no doubt it was all predetermined.

As the day advanced, 33 out of the 38 groups that had initially joined in calling for the Friday 29 July stand withdrew in protest. The five groups that remained in the square were the Sharie (as in sharia) Authority for Rights and Reform, the Muslim Brotherhood, the Salafi Call, the Islamic Jamaa, and the Front of Popular Will.
The statement issued by the five groups under the title “Why the Friday of 29 July” stresses at the outset the principles unanimously agreed upon: the legitimate demands of the families of those who died during the Revolution; the right of the injured to medical treatment and moral honour; and the bringing to justice of corrupt officials. Then it calls for restoring the revolutionary spirit, enhancing unity among Egyptians and aborting ploys to split the national front. The bitter irony here is that the same statement which deals a severe blow to national consensus stresses unity and warns against division. It then voices opposition to any custody over the Egyptian people and their free choice. Finally, the statement rejects the proposition to outline guiding principles for the new constitution, branding it as a measure to undermine the people’s freedom to draft their own constitution.
The five groups usurped the right to speak for the public and claimed to be, to the exclusion of the other 33 factions, sincere in defending public interests. So it was that Egyptians were told that these Islamist groups, with their clamour and racial banners, are the sole representative of the Egyptian people and their exclusive protector against those who would hijack their will or confiscate their choices.  Five vociferous groups thought they could falsify the truth and unilaterally assume the mission of defending the public against those hatching conspiracies against it.
Yet, what exactly are the conspiracies the 33 factions, ‘seeking to deceive the public and hijack their will’, are hatching? What has driven the five groups to don the cloak of the savior and rise in defence of the public? It is the concept of proposing principles to govern the drafting of the new constitution. These concern two aspects: the basis upon which the constituent assembly charged with writing the constitution would be formed, and the principles proposed to be instated to govern the new constitution. Do these principles in any way constitute an extreme evil from which Egyptians should be protected?
I appreciate the sincere efforts the national community has made over the past four months. Several political and rights movement proposed sets of constitutional articles, and fine-tuned them in the light of public response. They suggested measures to govern the structure of the constituent assembly, to fully secure the rights of Egyptians in all their diversity to be represented in a balanced way. It is beyond me how anybody could read in such positive attitude some conspiracy or deliberate intention to hijack the people’s will.
The accusations levelled by the five Islamist groups on Friday 29 July thus are absolutely unfounded. Why then the persistence in distorting the national effort and misleading those who are poorly aware? What benefit is there in hijacking the constitution for the interest of specific groups that have declared agendas far removed from the aspirations of Egyptians in a modern, civil, democratic State?
Answer to these questions lie not in verbal battles, but in highlighting the efforts exerted by the national forces, which ultimately produced the consensus document for fundamental constitutional principles, and the proposed measures for selecting the members of the constituent assembly to draft the constitution. This would help people realise who works for the good of this country and who desires it to live in the dark. I plan to open this file in detail in future editorials.
Tweet
Author