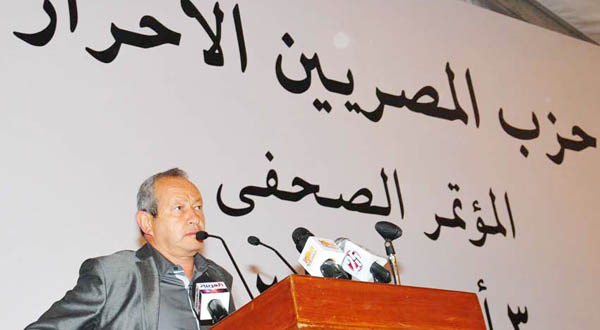 CAIRO: A liberal Egyptian party led by a Christian telecoms tycoon has positioned itself as the main challenger to Islamist parties in parliamentary elections in November, analysts said on Wednesday.

The Free Egyptians Party, founded after President Hosni Mubarak was toppled in a popular uprising in February, said it had reached a milestone figure of 100,000 members, making it the largest party after the Muslim Brotherhood, Egypt's best organized political force.
Many liberals have been concerned Islamists, including the Muslim Brotherhood, may try to turn Egypt into an Islamic state if they secure a majority in parliament, which will give them a free hand in drafting a new constitution.
"This shows we now have a new strong liberal group which seeks democracy and modernity and which could stand up against Islamic forces, including the Muslim Brotherhood, in their attempts to turn Egypt into an Islamic state," Nabil Abdel Fattah of the Al-Ahram Centre for Political and Strategic Studies told Reuters.
The Muslim Brotherhood has an estimated membership of between 500,000-700,000. Most other liberal parties are estimated to have a few thousand members each.
The Free Egyptians Party said in a statement it was pleased "its effort to communicate with the Egyptian public was reaping benefits."
The party, led by telecoms tycoon Naguib Sawiris, recently joined a coalition of 14 mostly liberal political groups in setting up a coalition to run as a bloc in the elections. The bloc has agreed to work together in raising funds for the elections, field one list of candidates and campaign together.
Many liberal groups, including the Free Egyptians Party, have endorsed a recent proposal by the government of Prime Minister Essam Sharaf calling for a "constitutional decree" that will stop Islamists from monopolizing the drafting of a new constitution if they win a majority in elections.
Egypt's upcoming parliamentary election is the first vote after the Mubarak's ouster and could be the state's first free vote in decades. Elections under Mubarak were often seen as rigged in favor of him and his party.
The parliamentary vote will be followed by a presidential one.
Under the current constitution, presidential candidates must either have the support of 30 parliament members or the backing of 30,000 eligible voters or be nominated by a registered political party with at least one member elected to either the upper or lower house of parliament.
Tweet
Pope Shenouda Article