Betting on the democratic spirit 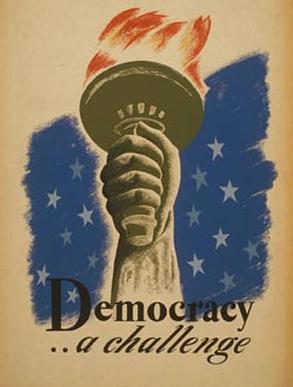 What do we mean by a “civil state”? Is it the civil state of supra-constitutional principles advocated by the army and liberals that raises the hackles of Islamists who view it as an undemocratic attempt to install secularism? This is not the kind of civil state I support.

It will not satisfy me one bit see the military stifling the ambitions of some Islamist groups that wish to establish an Islamic state. In a democracy, our best bet against the tyranny of the majority is the persistence of democratic struggles and the emergence of new revolutionary groups whose strength lies in adventurousness, not in their search for guarantees.
I belong to a leftist  democratic party and have a strong bias towards revolutionary groups and independent activists. Rather than look to the military for protection, I would rather counter Islamist influence through political mobilization and coalition building.
In the early stages of the revolution, non-Islamist groups had a bold spirit of adventure and an ability to take risks without searching for guarantees from those in power. Meanwhile, many Islamists remained paralyzed by a fear of disobeying their rulers and a desire to maintain stability. Unfortunately, civil forces are now losing much of that early vigor.
Yet, I maintain faith in this democratic spirit whose only guarantee against attempts by the military to hijack the revolution is continuous struggle. This spirit should also assuage any fears of an election bringing Islamists to power.
While I support non-Islamist political forces, I was a minority amongst them when I voted in favor of the constitutional amendments in March. My “Yes” vote was not in support of the Supreme Council of the Armed Forces (SCAF). Nor was it driven by a desire to preserve Egypt’s Islamic identity. Egypt is a diverse country undergoing a political transformation and I don't want to freeze its identity in a fixed document.
My vote reflected a desire to ensure the departure of the SCAF and to hold parliamentary elections on schedule so that elected lawmakers could represent all Egyptians from across the political spectrum. After the elections, a panel would be set up to write the constitution, which we would accept no matter what the outcome.
Admittedly, democracy is not always a solution; it can also be a problem. There’s always a risk that ballot-box results may deprive certain groups of their rights or foster a tyranny of the majority. However, the democratic spirit of ordinary people will work to address the limits of electoral democracy. This is the same spirit that drove people to join mass protests and express their anger on 28 January. It inspired them to disregard the seemingly wise calls for stability and instead endure the hardships of revolt to improve their lived reality. This spirit remains at the heart of the Egyptian revolution and represents a desire for liberation, not coercion.
We were reminded of the democratic spirit once again when activists rose to support Asmaa Mahfouz, a well-known 6 April activist, who was recently charged with insulting the military and then released under popular pressure. Why not continue betting on this spirit ? Why not trust that broad-based political participation will create a new democracy that will surprise everyone -- liberals, leftists and Islamists?
I’m counting on this spirit, which brought down Mubarak’s autocratic regime, to protect us from any attempts to divert Egypt’s path to democracy. It will place checks on those in power and at the same time expand the margin of popular participation in Egyptian politics. It's our best guarantee for a truly civil and democratic state.
Tweet
Pope Shenouda Article