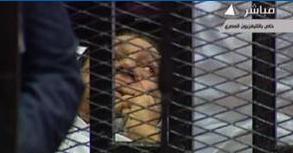 The lawyers announced that they would hold a press conference later in the day (Sunday), in which they would outline their reasons for attending the trial.
Mubarak, his two sons – Alaa and Gamal – and former interior minister Habib el-Adli, along with the latter’s six deputies, will be in court tomorrow (Monday) for the third session of their trial.
Last month, the first session of the trial was broadcast live, but subsequent sessions are not being broadcast.
The suspects are charged with ordering the killing of protesters in the iconic Tahrir Square during the 18-day protest last January and February.
Tens of Mubarak's loyalists gathered outside Cairo International Airport to welcome the lawyers.
Tweet
Pope Shenouda Article