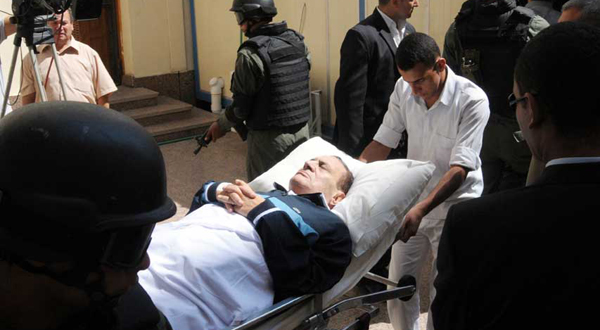 CAIRO: The head of Egypt's ruling military council will testify in a closed session next week to a court that is trying ousted President Hosni Mubarak over charges of conspiring to kill protesters, Judge Ahmed Refaat said on Wednesday.

Both the defense and prosecution sought the testimony of Field Marshal Mohammed Tantawi, who was Mubarak's defense minister and is now the military ruler.
Armed Forces Chief of Staff Sami Enan will also give testimony on Sept. 12 behind closed doors for national security reasons, the judge said.
Mubarak's former intelligence chief Omar Suleiman, who also briefly served as vice president, will testify on Tuesday, Sept. 13.
Current Interior Minister Mansour El-Essawy and his predecessor Mahmoud Wagdy will testify on Sept. 14 and 15 respectively, the judge said.
Many Egyptians believe that their testimony is key in determining whether Mubarak ordered the use of lethal force against the uprising.
Lawyers acting for the families of those killed during the popular uprising that forced Mubarak from power in February had repeatedly requested that the court hear the testimony of the five.
But the closed sessions, to start Sunday, will keep key details about the relations between these top figures secret.
During the hearing on Wednesday, a police officer in court as a witness was charged with giving "false testimony", following accusations in the Egyptian media of a cover-up.
Prosecutor Mostafa Suleiman said police captain Mohamed Abdel Hakim was charged with giving "false testimony in favor of the accused" in the case over the killing of hundreds of protesters in Egypt's January-February revolution.
He said Hakim testified in court that anti-riot units deployed in Cairo on Jan. 28 had been equipped with blank ammunition and tear gas, whereas he had said in previous questioning that hunting ammunition had been used.
Sixty-two people were reportedly killed in clashes between security forces and demonstrators that day in the capital.
Prosecutors said that police officer Abdel Hakim had initially told the prosecution during their probe that he was given 300 shotgun cartridges, but in court he denied this.
"The guns were not allowed to be with the unit. The instructions were for officers not even to take their personal guns," said Abdel Hakim.
The judge said Hakim would be held in a separate room pending a decision on his testimony. When he was removed, one lawyer shouted after him: "You liar, you liar. You have been paid. This is the blood of your brother."
The judge looked to the cage and asked defendants if they had comments. Mubarak responded: "No I have no comment".
Earlier in the hearing, lawyers for families of dead protesters filed requests to question the ousted president's wife, Suzanne, and the country's army chief.
The judge suspended proceedings at one point to restore calm and also defended the work of the prosecution against criticism from lawyers acting for victims' families.
"They are men of law and justice. They must be respected. They have done great work in investigating this case," he said.
Outside the court, protesters also voiced frustration at the witness accounts. Many Egyptians say police used tear gas, rubber bullets and live ammunition to try to quash protests.
"My friend dropped dead in Tahrir Square right next to me. He was shot in the head by the police," said Rabia Al-Sheikh outside the court. "Why don't they let us inside to testify. Why are they calling on police to testify and not the people?"
At the last court session on Monday, none of the witnesses who gave evidence implicated Mubarak or his interior minister Habib El-Adly for the deaths during the revolution against his three decades of autocratic rule.
The latest hearing was the fourth in the trial which opened on Aug. 3 and, unlike the first two sessions, the process has been taken behind closed doors and off-camera.
Mohamed El-Damati, a representative of the families' lawyers in civil cases, filed to question Tantawi, to whom Mubarak handed power on his ouster in February, and Suzanne Mubarak.
Tantawi was defense minister for two decades under the veteran president. He previously said that the army refused orders to shoot at protesters.
The lawyers have said they also want to question former intelligence chief General Omar Suleiman who is reported to have said Mubarak was aware of each bullet fired during the revolution.
The case against the ousted president, the minister of interior and six of his security chiefs suffered another blow on Monday when it emerged that the prosecution's main witness had been convicted of destroying a recording of police telephone calls.
And two other police officers summoned to back the case that Mubarak and the other accused had ordered the shootings of protesters testified they had in fact been ordered to exercise "restraint."
"The prosecution witnesses turned into defense witnesses," independent daily Al-Shorouk said, deeming the third hearing "a battering for the victims' families."
Television footage showed the ailing 83-year-old Mubarak, who faces charges of involvement in the killings and corruption, arriving at the courtroom in an ambulance and on a stretcher on Wednesday, as on previous sessions.
There were no reports of trouble between his supporters and opponents outside the court, unlike on Monday when police arrested 20 people.
But late on Tuesday, football fans clashed with police in a Cairo stadium, injuring over 100 people, after they chanted slogans against Mubarak and torched dozens of cars.
The charges against Mubarak, who has pleaded innocent, follow months of protests demanding justice for the roughly 850 people killed during the revolt which ended his regime.
The trial, adjourned until Thursday, is being held in a police academy once named after Mubarak on Cairo's outskirts.
Tweet
Pope Shenouda Article