Subsidies in Egypt not meeting needs of the poor 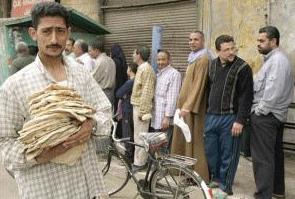 CAIRO - Shabaan Ahmed who comes from the Delta governorate of Beheira and works for a family in the capital goes every two months to what is known as the district 'supply grocer'.

Shabaan does not get subsidised foodstuff, such as rice, sugar and cooking oil, for himself but for his employer's family, who can actually afford to buy these items from the nearest supermarket at the going market prices.
The fact is that this family has a ration card entitling its members to a monthly quota of subsidised items the amount of which is determined according to the number of family members.
Curiously enough, Shabaan, who sustains a family of six back in his hometown Kom Hamada, does not have a ration card, although he appreciates the generosity of his employer in giving him a few bottles of oil and bags of sugar from the monthly quota.
Such are the discrepancies of the food subsidy system in Egypt, which has in many instances lost its way to meeting the needs of deserving citizens.
As experts have pointed out subsequent Egyptian governments have not managed to channel subsidies to the poorest strata basically because of the inability to determine the identity of those on the lowest incomes.
“It is very difficult to establish the actual earnings of many Egyptian families especially those that are sustained by breadwinners who are working on and off in unstable jobs”, says professor Alia el-Mahdi, Dean of the Economic and Political Sciences Faculty, Cairo University.
She, however, said that the average income could be more or less monitored by certain indicators, such as electricity and water consumption, location of the home, and the number of individuals working in each family.
Professor el-Mahdi believes that those who deserve electricity, energy and food subsidies should not necessarily enjoy them to the same degree. She suggests, in this respect, implementing a gradual scale that relies on income brackets complying with relevant social reports.
“The problem does not lie in whether to offer financial or in-kind subsidy as much as it being related to whom deserves to get the subsidy”, she told Al-Gomhuria Arabic daily. El-Mahdi was much in favour of reconsidering subsidies of oil products which amount to LE 99 billion of which industrial factories and tourist establishments get the lion's share.
She argues that the flaw in the subsidy process is partially attributable to poor co-ordination where, for instance, the Supply Commodities Authority delivers the items to the Social Solidarity Ministry which, in turn, hands over large quantities to 'supply grocers'. Professor el-Mahdi commented that the chain is long, leading to many defects on its way.
Ismail Shalabi, an economics professor of Zagazig University, regrets that subsidies consume a large portion of the State budget at a time when well off strata are benefiting from the government subsidy programme. He gave, as an example, restaurants and factories that use subsidised butane gas cylinders.
In his opinion, in-kind subsidy based on a comprehensive social survey presents itself today as a priority. According to his understanding of the kind of subsidy needed, poor families should be supported by small projects that engage a similarly deserving workforce.
These projects, as he envisages, should be tax-free. “In this way, the government would be simultaneously solving the problem of several families and at the same time helping to avoid potential thugs going on the streets”, he suggested.
Rough estimates underline that the needy get about l6 per cent of total subsidies whereas well-to-do families and business sectors receive 38 per cent of subsidies.
There is a consensus, however, on the part of economic experts that the lack of a clear-cut strategy and accurate statistics of the actual deserving citizens have squandered millions of pounds.
These funds should have reached those who are desperately seeking a decent way of life in a country, in which 40 per cent of the population are living below the poverty line.
Tweet
Pope Shenouda Article