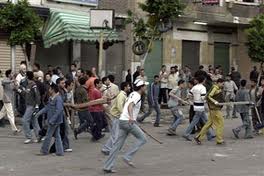 (AINA) -- Christians in the Upper Egyptian village of Elmarinab in Edfu, Aswan province, have been forbidden to leave their homes or buy food until they remove the dome of St. George's Church, which was rebuilt in its previous location. Village Muslims, backed by Muslim Salafists from neighboring villages, have threatened to demolish the church on Friday September 9 after prayers and use it as a mosque.

Despite the presence of security forces, Muslims have blocked the roads to the village, refusing passage of any Christians under any circumstance.
Yesterday the military governor in Aswan was contacted as Christians were starving in their homes. Security officers were sent and accompanied two Christian youths to buy food for the villagers. Muslims at the entrance of the village tried to stop the two security cars. "Failing that they threatened that this would be the last time," said one villager. "It was heart-breaking to see the elderly running with the children to get a loaf of bread."
On Friday September 2, a "reconciliation" meeting was held under the auspices of security between Muslims and Christians in which the Christians were forced to give in to the Muslim demands of the new church being stripped of crosses, bells and outside microphones (which churches never have).
"For the sake of peace we agreed to their demands," said Father Makarios Boulos, "although the approved permit included crosses, bells and domes."
On Tuesday evening, the same Muslims who attended the reconciliation meeting started to congregate near the church demanding the removal of the six small domes, which would, according to the church's priest, make the whole church collapse if removed.
Muslims also demanded removal of any signs of it being a church. "It has to be called a 'hospitality home,'" Father Makarios said.
Confronted with escalating Muslim demands, the Bishop of Aswan, Anba Hedra, refused and warned those who incite sectarian violence, pointing to the fact that the church was rebuilt legally, and any concessions on the part of the church was done for the love for the country, which is passing through a difficult phase. The military council was asked to send troops to protect the village against Muslim violence
Early this morning two army tanks arrived at the village, manned by officers. The military governor paid a visit to the village today together with area heads of security to solve this crisis.
They listened to the Muslims, who insisted the previous church was not a church, but a hospitality home. The Coptic side was represented by Father Makarious Boulos, Father Salib Elias of the Aswan Coptic Diocese and lawyers representing the church, who presented all valid documents.
According to Mr. Mikhail, a worker at St. George's Church, who was interviewed by Coptic TV, the Muslims were not represented by any official. "They said they are people who have control over the Muslim youths."
Muslims chanted "Allahu Akbar" (Allah is the greatest) and said they want the church razed. Mikhail said Security tried to calm them down but fearing the situation would turn for the worse, the meeting was recessed with the promise that "the army and security representatives will come to a solution acceptable to both parties before they leave the village."
The authorities demanded that no construction be carried out or services held in the church, and Muslims to refrain from violence.
Muslims have been spreading news that the new church was never a church but a hospitality home. Father Makarios said that the church was always a church and has been protected by the police for twelve years and they already have a hospitality home one block away.
The church of St. George, built a century ago with soft bricks and palm tree branches, was so dilapidated the local council said it would be unsafe to carry out services there. The church was given permission by the Aswan Governor in June 2010 to rebuild, and the authorities had approved the design. In June 2011 the building of the church began and services were held.
Father Makarious said the village Muslims never showed any bad feelings when permission for the rebuilding the old church was issued. "The church was nearly complete when Muslims started to complain."
Village Copts have warned that any attack on their church will lead to sectarian clashes. It was reported that some Coptic youth are inside the church guarding it against potential vandalism. Copts have also reported that while they are detained in their homes, Muslims have destroyed their crops.
Egyptians Against Religious Discrimination (EARD) reported the incident to the justice committee affiliated to the Prime Minister's office. A statement issued by EARD today condemed the incitement to demolish the domes of St. George's Church. The statement accused the Salafists of inciting the village Muslims against the Copts and criticized the "obvious indifference, amounting to collusion, of officials responsible for the security of the country." The statement held the Military Council responsible should of any harm come to the Copts, their property or their church together with its bells, crosses and domes.
Dr. Naguib Gabriel, head of the Egyptian Union of Human Rights Organization (EUHRO), said this incident is one in a series of persecutions and attacks on Copts and their churches. "The Muslim Brotherhood announced immediately after the revolution that it is impossible to build any new church in Egypt, and churches which are demolished should never be rebuilt, as well as no crosses over churches or bells to be rung."
Dr. Gabriel, who is a Copt, said the siege of the Copts in their homes is an "international crime" where a minority, just because of its religion, is imprisoned in homes and threatened with destruction of their religious buildings. "When we bring the Coptic case to the International community, no one should blame the Copts or accuse them of exaggeration when they highlight the Muslim intolerance in Egypt."
Tweet
Author