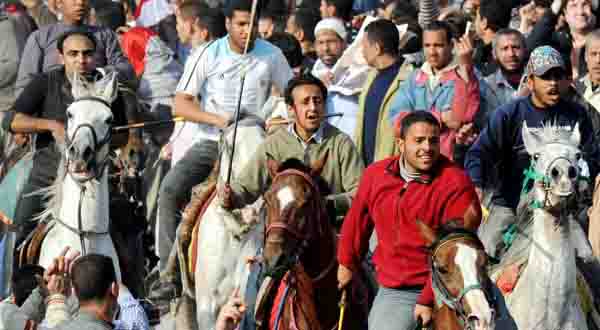 On Sunday, the prosecution accused El-Sherif, Sorour and 23 former government officials and NDP MPs of inciting attacks aimed at terrorizing peaceful protesters and dispersing protests held to bring down the regime.
All 22 suspects denied the charges, with three suspects being tried in absentia.
“A group of them were pillars of the former regime who abused their legislative and executive positions, while the others are the ones who built their empires under the auspices of the former regime,” the prosecution said during the court session, headed by Judge Mostafa Hassan Abdallah.
The prosecution said that immediately after the former president delivered his speech on Feb. 1, one group wanted to save the regime to keep their positions, while another wanted to show their loyalty to it.
“The defendants worshiped the former regime and its leaders,” the prosecution said.
The prosecution added that a fact-finding mission under the supervision of the Ministry of Justice submitted a report to the Prosecutor General stating that the “Camel Battle” was orchestrated by El-Sherif.
According to the report, El-Sherif incited former NDP members and police officers to mobilize dozens of thugs, horseback riders and owners of camels in the tourist area surrounding the Giza Pyramids to attack Tahrir protesters using white weapons to force them out of the square.
Several witnesses said that they have seen the suspects in different areas (Mostafa Mahmoud, Maspero, Abdel Moneim Riad) leading a mob to attack protesters in Tahrir Square.
The evidence against the suspects fills 55 pages and includes testimonies of 87 witnesses.
The fact-finding mission’s report indicated that the “Camel Battle” might have also been instigated under the orders of Gamal Mubarak, the younger son of ousted president Hosni Mubarak. However, charges were dropped against him.
Ibrahim Kamel, a businessman, Mohamed Aboul Enein, the former head of the PA’s industry committee and board chairman of Cleopatra Group, Aisha Abdel-Hady, former minister of manpower, Hussein Megawer, chairman of the General Egyptian Federation of Trade Unions (GEFTU), and notorious lawyer Mortada Mansour were among the suspects in the case.
"They played a role in transporting truckloads of stones to be used by thugs to injure Tahrir Square protesters,” the prosecution said, quoting the report.
Evidence and lawyers demands
In the session, Judge Mostafa announced that the court has unsealed the evidence which includes nine replicated CDs, photographs, and the report of voice expert in the Radio and Television Union attached to two replicated CDs.
The court registered the attendance of only one civil rights lawyer defending one victim’s family who demanded LE 50,000 from the prominent suspects.
Earlier, the session was delayed for an hour when lawyers could not get into the courtroom due to its small size, leaving several civil rights lawyers outside. One judge knocked on the door asking to be allowed in, only to be sent to prosecution by the judge.
“All civilians are allowed to attend the session as long as they can fit into the room,” the judge said.
The judge repeatedly rebuked defendants and lawyers for not following procedures, most notably with Mansour, the notorious chancellor who represented himself during the trial.
The court heard the defendants’ lawyers’ requests, with most requesting more time to review the case documents.
One lawyer also requested that the judge allow the lawyers to attend the court sessions with written permits to avoid the overcrowding of the courtroom.
However in his ruling, the judge stressed that only two lawyers for each defendant are allowed to attend.
The judge also agreed to a defense lawyer’s request to end the broadcasting of the proceeding as it violates “respect for human rights” of the suspects.
Judge Mostafa said that the television broadcasting will stop until the verdict is announced.
Lawyers also asked to include all investigations into the “Camel Battle” that were conducted by the military prosecution. They also requested to include the investigations conducted by the public prosecution in Al-Abbasseya clashes that took place on July 23 and also a copy of the investigations into the June 28 clashes in front of the Balloon Theater.
The lawyers requested a permit for the Ministry of Health to reveal the names of those killed on Feb. 2 and 3 and the ambulances cars numbers that transported the injured to the hospitals.
The trial will resume on Sept. 12. Witnesses will testify in court on Sept. 13 and 14.
Tweet
Pope Shenouda Article