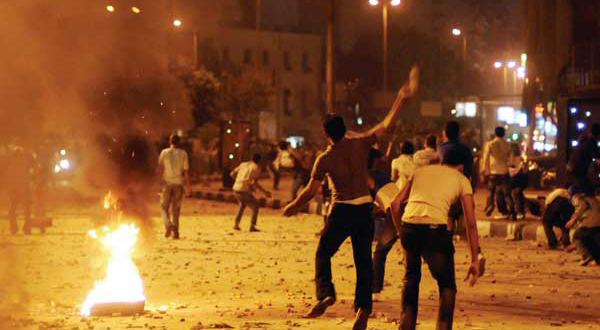 CAIRO: The new amendments to the emergency law announced by the ruling army council are illegal, experts argued Monday. The council said the state of emergency would continue until mid next year.

"Legally, an emergency state can only be applied in cases of natural disasters, war and epidemics. An amendment should only be related to these three factors," director of the Arab Center for the Independence of the Judiciary and Legal Profession Nasser Amin said.
On Sunday, the Supreme Council of the Armed Forces (SCAF) decided to amend a number of articles and add new ones to the emergency law following recent clashes between protesters on one hand, and police and army forces on the other, outside the Israeli and Saudi embassies as well as the Giza security directorate.
Official Middle East News Agency (MENA) quoted SCAF member and assistant defense minister to legal affairs Mahmouh Shahin as saying on Monday that the reasons behind the amendments have to do with the disruption of the public security.
"Extending the scope of crimes on which the emergency law is applied … is because of the security conditions the country has been going through," Shahin said.
Shahin told a TV channel the night before that the law would stay in force until mid 2012
He stressed the importance of confronting thuggery and whatever threatens Egypt or affects its image before foreign entities.
Shahin explained that the supreme emergency state security court will be overlooking the cases on which the law is applied instead of the usual judiciary.
"We want to apply the rules of law not carry out detentions," he said, adding that SCAF took this step after acquiring information about external entities attempting to disrupt stability in Egypt.
"The former regime had also illegally amended the law in 2010. So this is considered an illegal amendment to an earlier defective adjustment," Amin, also a member in the International Court of Justice, told Daily News Egypt.
In May 2010 while the parliament renewed the state of emergency, the application of the law was limited to drugs and terrorism related crimes; but activists said the restrictions were only on paper as the law was used against them.
Decree number 193 of 2011 released Sunday by SCAF dictates that the rules of imposing an emergency state are valid in case of facing domestic disturbances, terrorism and disruption of national security and public order.
The emergency law is further enforced when confronting acts of thuggery, attacks against the freedom to work, the sabotage of institutions, the disruption of transportation, the obstruction of roads and the deliberate broadcasting or spreading of false news, rumors or statements.
"Such new articles can simply be used against freedom of expression. You as a reporter can easily be arrested for quoting a [controversial] source on bases of spreading false news or rumors," Amin said.
The law also applies to funding weapons and arms trafficking and drugs.
Law professor Salah Sadek argued that no emergency law is required in the first place to combat such crimes.
"The penal code covers all these crimes and defines a tough penalty for each. There is no need to apply extraordinary regulations under the pretext that regular laws are not enough," Sadek told DNE.
Sadek added that the emergency law can only be amended via a new bill released through a presidential decree.
"If the rather unclear news we read about the amendments turn out to be accurate, then the way it will be amended is definitely illegal," he said.
Unlike the general perception of the emergency law, the bill was first enacted during the reign of late president Gamal Abdel-Nasser in 1958.
An emergency state based on the 1958 law has been put into force since October 1981 following the assassination of then-president Anwar Sadat.
The law restricts personal freedoms and the right to hold public meetings or gatherings. Moreover, it gives police powers to act according to mere suspicion.
A joint SCAF-Cabinet meeting had decided on Saturday to activate all articles of the controversial emergency law.
During the clashes that led to the activation of the law, several protesters managed to storm the Israeli embassy building, bringing down the Israeli flag. Protesters had for hours prior worked on tearing down a recently erected wall along the street on which the embassy is located. There was no police intervention during the day.
The clashes further resulted in killing three and injuring 1,049 including policemen.
The Israeli ambassador, his family and working staff left Cairo on board an Israeli military plane hours later. The situation led to a diplomatic crisis between Egypt and Israel, especially after the death of six Egyptian policemen on the border by Israeli forces at crossfire last month.
Interior Minister Mansour El-Essawy warned on State TV that police would open fire at anyone who attacks the interior ministry or police stations, considering him a threat to the policemen's lives.
"This is a very dangerous indicator that allows police officers, like the case with the overthrown regime, to have more authority against citizens," Amin said.
In March, SCAF said the emergency law will be lifted before the parliamentary elections which are scheduled for September, the Supreme Military Council of the Armed Forces said on Monday.
General Mamdouh Shahin, council member and assistant to minister of defense for legal affairs, said in a press conference at that time that elections won’t be held under emergency laws.
Parliamentary elections are due to be held later this year followed by presidential polls next year.
In 2005, then-president Hosni Mubarak promised to lift the emergency law and replace it with an anti-terror law. In 2006, the Prime Minister issued a decree to form a committee for preparing a draft law. Yet the law was not amended under Mubarak’s reign, who was ousted in an 18-day nationwide uprising.
A key demand of the revolutionaries before, during and after the January 25 uprising was to end the state of emergency.
Tweet
Pope Shenouda Article