Egypt inflation down to 8.5 percent in August 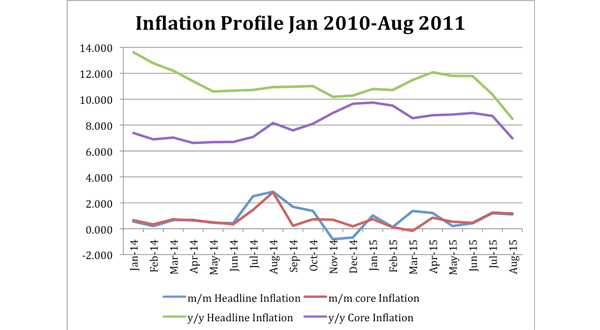 CAIRO: Egypt’s overall annual inflation in August reached 8.5 percent, easing from 10.4 percent in July, according to the Central Agency for Public Mobilization and Statistics.

The figure is at the lowest it has been in months since the popular uprising that ousted former president Hosni Mubarak earlier this year.
However, an increase in the prices of commodity products such as rice, eggs and meat, led to a 1.2 percent rise in the monthly inflation rate for August doubling from July, according to economic experts.
Although food prices have been on the rise, the rate has been decelerating, according to experts.
“Monthly inflation rate increased in August by 1.2 percent, relative to July, reflecting 2.5 percent increase in food and beverages,” Kandil said.
The increase in the monthly rate came as a result of the increase in a number of main commodities: potatoes which were at 16.39 percent, rice at 9.72 percent, eggs 7.89 percent and fresh red meat 2.65 percent, according to reports by CAPMAS.
“Comparing core inflation and headline inflation in August 2011, compared to August 2010, both appear lower compared to the higher inflation we experienced in August 2010, which was around 11 percent for headline inflation and more than 8 percent for core inflation,” Kandil said.
However, according to Kandil, the annual measure of inflation is “artificially low” in August 2011.
This shows that the annual inflation rate is actually understated because food prices surged sharply in July and August of last year.
“Most of the increase was attributed to the hike in prices for food and beverages which amounts to 39 percent of the CPI index,” said Kandil. “Hence, the comparison to last year’s index is not accurate as it compares the index to the shocked base last summer.”
Egypt’s monthly inflation rate, however, has been steadily increasing and since March of 2011 it has been high. According to Kandil, the year’s average inflation is likely to remain high.
The “wedge” between core inflation and head inflation is also widening.
“I think what we’re seeing more recently, some of the items that have seen a lot of increase are contributing to higher core inflation,” said Kandil. “Like when eggs prices go up that would mean core inflation is rising, along with things like red meat, other items such as potatoes or rice they would only contribute to headline inflation, because core excludes fruits and vegetables.”
Overall, food prices have been on the rise in Egypt as international price standards also surge.
In June, the Cairo Chamber of Commerce reported a rise in the prices of oil, canned fish, processed meat, and several other food items by 8 to 11 percent from April to May 2011.
The month after, rates of imported and domestic raw materials saw a 50 percent increase that caused prices of sugar, yogurt, milk, coffee beans, nuts and meat to soar as well.
Prices also continued to hike throughout July due to a traditional pressure on food costs during Ramadan, which fell on August this year.
Tweet
Pope Shenouda Article