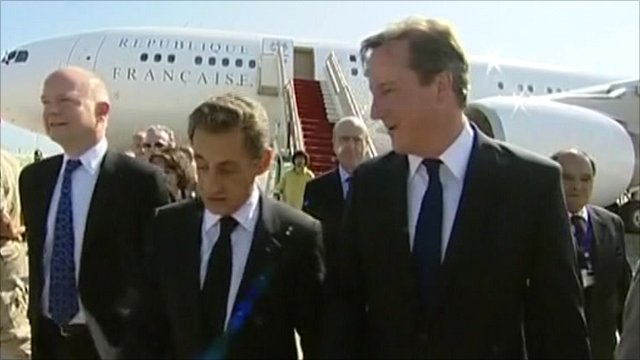 British PM David Cameron and French President Nicolas Sarkozy are in Libya, the most senior Western leaders to visit since Muammar Gaddafi was ousted.

Their countries were at the forefront of Nato's Libyan operation.
They met National Transitional Council (NTC) leaders in Tripoli, and are to fly to Benghazi to speak in the former rebel stronghold's Liberty Square.
NTC chief Mustafa Abdul Jalil thanked the two leaders for taking "brave positions" during the Libyan uprising.
"They showed us political, economic and military support which helped the rebels establish a state, and we thank France and the UK for that," he told a Tripoli news conference.
On Wednesday, Mr Abdul Jalil had appealed for weapons to help the NTC take the few areas of Libya still loyal to Col Gaddafi, telling the BBC the fugitive leader was in the country's south, plotting his revenge.
Responding to Mr Jalil's welcome, the British and French leaders praised the bravery of the Libyan people, and pledged continued support for the NTC's goal of creating a peaceful and democratic state.
"The fact that roads are full of traffic, your water is flowing, your hospitals are working, this is impressive," said Mr Cameron.
"But... Gaddafi is still at large. We must keep on with the Nato mission until civilians are all protected and this work is finished.
"We will help you find Gaddafi and bring him to justice, and we will help you take dangerous weapons such as mines and surface-to-air missiles out of Libya."
Mr Sarkozy urged Libyans to avoid "vengeance and retaliation", calling on them to preserve unity and seek reconciliation.
He said France's focus was on consolidating the position of the NTC and pursuing the last remnants of the Gaddafi regime, rather than focusing on economic deals or reconstruction contracts.
Easing sanctions
Mr Cameron and Mr Sarkozy arrived in Libya earlier on Thursday and flew by helicopter to a hospital where they were greeted by crowds of cheering staff and patients.
The two leaders are hugely popular in Libya, where common graffiti slogans include: "Merci Sarkozy!" and "Thank you Britain!"
Their visit had been under consideration for several weeks, correspondents say: Initially the plan had been to wait until security had improved across Libya, but the trip was brought forward to show support for the NTC after its arrival in Tripoli at the weekend.
Mr Cameron, who is accompanied by UK Foreign Minister William Hague, was set to announce that Britain is to:
deploy a UK military team to advise the NTC on security
return Libyan assets totalling £600m ($948m) to the interim authorities as soon as possible
make 50 places available in UK specialist hospitals for critically ill Libyans
provide £600,000 for de-mining efforts and £60,000 to pay for a police communications system
The UK on Wednesday circulated a draft resolution to the UN Security Council that would ease UN sanctions against Libya. Many UN countries - including all five permanent members of the Security Council - have recognised the NTC as Libya's legitimate authority. But the African Union, which met on Wednesday evening, has yet to do so.
Mr Sarkozy is reportedly travelling with 160 security officers, mostly from the specialist CRS riot squad.
'All the gold'
Nato has been carrying out air strikes under a mandate from two UN resolutions to protect Libyan civilians.
The US on Wednesday said it was encouraged by the increasing control the NTC was exercising over security forces in the country.
A written message attributed to Col Gaddafi, meanwhile, appealed to the UN to stop "crimes" against his birthplace, Sirte. The autocrat who led his country for four decades had previously said he would rather die than flee Libya.
On Wednesday, a message purporting to have been written by Col Gaddafi - and read out by a presenter on a pro-Gaddafi Syrian TV channel - called on the UN to "bear your international responsibility and intervene immediately to stop this crime".
As well as Sirte on the Mediterranean coast, Gaddafi loyalists still control parts of Bani Walid, south-east of the capital, and Jufra, while Mr Jalil said many pro-Gaddafi forces had fled to Sabha in the southern desert.
"There will be fierce battles in Sabha with equipment that we do not yet have, and we ask for more equipment to retake these places," he told the BBC on Wednesday.
He added that Col Gaddafi had possession of "all the gold" and would be planning attacks on cities, oil-fields and power plants.
NTC officials say members of the former leader's inner circle took gold and cash with them when they fled south across the border to Niger last week.
Mr Jalil confirmed that the NTC would not move the whole of its administration to Tripoli until the last pockets of pro-Gaddafi resistance had been captured.
At least 36 members of the fugitive leader's inner circle, including relatives and generals, have fled to neighbouring Algeria and Niger since Tripoli fell to NTC forces last month.
With roads to Tunisia, Egypt, Chad and Sudan largely controlled by anti-Gaddafi forces, Niger has been used as an exit route by Gaddafi loyalists - including his son Saadi.
Anti-Gaddafi fighters say they have captured the northern half of Bani Walid but have struggled to push further.
Tweet
Pope Shenouda Article