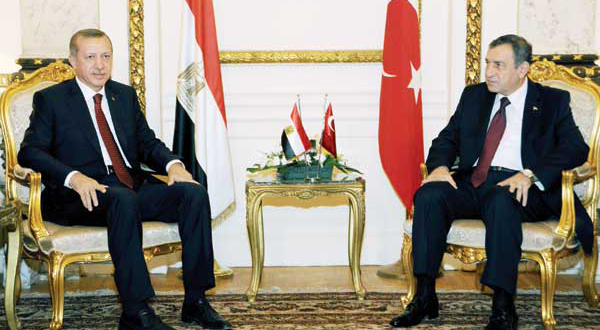 CAIRO: Egypt and Turkey will increase bilateral investments to $10 billion over the next four years, officials said in Cairo on Wednesday.

Turkish Prime Minister Recep Tayyip Erdogan and his Egyptian counterpart Essam Sharaf signed an agreement to increase and enhance the "strategic economic relationship" and boost investments at the Turkish-Egyptian Economic Forum on Wednesday.
"We can assure that over the next two years, investments [with] Egypt will increase to $5 billion, reaching $10 billion in four years," said Erdogan.
Erdogan also said he wants to see Egypt involved in the European Union's Nabucco pipeline project, Reuters reported.
The 4,000 kilometer Nabucco pipeline project plans to transport central Asian gas through Turkey, Bulgaria, Romania and Hungary into Austria and western Europe with an annual transport capacity of 31 bcm.
He reached out to Egyptian businessman at the forum, encouraging them to seek investments in Turkey as the door for economic cooperation between both countries will always be open.
While the current economic collaboration between Turkey and Egypt is strong, Erdogan pointed out that the number could be much higher given the strategic location of both countries.
"Our relationship is not just based on proximity and geography — our history and our people are similar, and our upbringing is the same," he added. "Today, 280 Turkish businessmen and 1,000 Egyptian businessmen are here to build strong, long-lasting economic relations, today's meetings are strategic."
Taking part in the forum was Egypt's Trade Minister Mahmoud Eisa, along with Turkish Minister of Economy Zafer Caglayan, and Minister Nihat Ergun, Turkey's Minister of Science, Industry and Technology as well as Head of the Egyptian Businessmen's Association Hussein Sabouri.
Ergun asked Egypt's prime minister to ease visa regulations for Turkish visitors and businessmen, as Turkey did shortly after the events of the January 25 uprising.
Erdogan said Turkey was able to withstand and recover from the global economic crisis in 2008 because of its fight against corruption and its successful economic system.
He emphasized that Egypt must not "turn back from the path of reform and the path of democracy" as the calls coming out of Tahrir, which resounded across the globe, were loud and clear.
"The Turkish-Egyptian cooperation is not only important, but it is a strategic partnership for the region," said Sharaf. "This historic role of our partnership will be political and economical."
"Whether we will be dealing with issues that concern Palestine, Iraq, or Syria, we first have to achieve economic success in order to build our political role," Sharaf stressed.
Gas exploration
Turkish Energy Minister Taner Yildiz said Turkey may carry out gas exploration in the Mediterranean with Egypt and that it was considering importing gas from the north African country, according to Reuters.
"Turkey and Egypt may work together in oil and gas, we have discussed this topic, now some time is needed, we may carry out exploration in the Mediterranean. We are importing natural gas from five countries, we are considering if we can add Egypt as the sixth, we are also in talks regarding LNG," Reuters cited Yildiz as saying.
Yildiz said Turkey had signed two energy memorandum of understanding deals with Egypt, one of them regarding cooperation of third-party countries and the other was related to power.
Yildiz also said Turkey would set up an electricity transmission line between Syria, Lebanon, Jordan, Palestine, Egypt and Libya in seven to eight years.
Tweet
Pope Shenouda Article