Ahly on tough mission on Friday 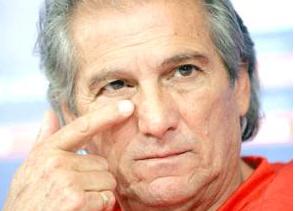 CAIRO – Egypt's Al-Ahly are on a tough mission on Friday when they host Esperance of Tunisia in the African Champions League quarters in Cairo Stadium.

It is a crucial game as Al-Ahly must beat Group B leaders Esperance by two goals in the Cairo match to guarantee a place in the last four.
Security measures have been taken into consideration to secure the fans before and during the match, according to security officials.
It has been reported that the Stadium will open at 3pm and then close at 5:30pm. Only people who have tickets will be allowed to enter the Stadium. No-one can enter on the strength of a club membership card.
Security officials said that it is forbidden to bring fireworks, metal water bottles and boxes of matches into the Stadium, but cartons of juice and plastic water bottles are OK.
The Tunisian team arrived in Cairo on Wednesday.
The 'Red Devils' have won the competition a record six times, but a weary, ageing squad have found the going tough lately, with just one win in five group games.
Despite this, Ahly board member Khaled Mortagei has told BBC Sport that he is confident his side will advance.
"Hopefully this will happen. If we play the same way we did with the support of 100,000 spectators in Cairo Stadium, which I believe is going to be the case, I think we can do the job," he said.
Cameroonian Joseph Yannick N'Djeng scored the only goal when Esperance defeated Ahly in Tunis two months ago and the US$960,000 replacement for Nigerian Michael Eneramo is proving a profitable investment.
Esperance top their Group with nine points, while Al-Ahly are in the third place with six points. Wydad of Morocco are in second spot with seven points, against two points for Mouloudia Alger.
Ahly's striker Emad Met'eb will lead the team along with Mohamed Abu Treika and Mohamed Nagui 'Geddo' in Friday's game.
Ahly's coach Manuel Jose is hoping that the team will get on the scoring sheet in the first half and then find the net again in the second half.
Keeper Ahmed Adel Abdel-Moneim is expected to be between the sticks, while Rami Rabea', Wael Gomaa and Mohamed Naguib will be deployed in defence.
Tweet
Pope Shenouda Article