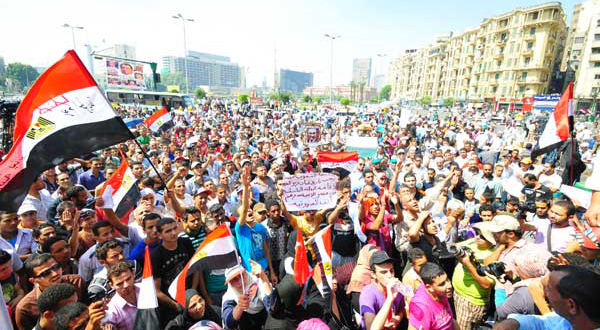 CAIRO: Hundreds of protesters rallied in Tahrir Square on Friday against the recent activation of emergency law clauses.

"This is an oppressive law that gives too much authority to security forces," Yehia Rabie, 50, told Daily News Egypt. "Why can't we suffice with applying our civil laws like the rest of the world?"
The Friday, which was originally dubbed the "Friday of Deafening Silence," where all the protesters were supposed to hold a silent sit-in and dress in black, ended up being as vocal as previous protests, but with a significantly lower turnout. It was also dubbed “No to Emergency Law.”
"The emergency law is invalid," the protesters chanted. They put up a stage and a sound system near the entrance of the Mohamed Mahmoud Street and played national songs, singing and festively waving the Egyptian flags.
Some justified the low turnout with the activation of the emergency law, claiming it intimidated potential protesters. The law gives police the right to arrest citizens on suspicion.
"People are afraid to be detained for standing up against the Supreme Council of the Armed Forces (SCAF)," Sayed Salamony, one of the organizers of the protests, said.
Decree number 193 of 2011 released by SCAF dictates that the rules of imposing an emergency state are valid in case of facing domestic disturbances, terrorism and disruption of national security and public order.
The emergency law is further enforced when confronting acts of thuggery, attacks against the freedom to work, the sabotage of institutions, the disruption of transportation, the obstruction of roads and the deliberate broadcasting or spreading of false news, rumors or statements.
The law also applies to funding weapons and arms trafficking and drugs.
Amnesty International on Thursday slammed the decision as a "serious erosion of human rights."
Many political powers refused to participate in the protests including April 6 Youth Movement and the Muslim Brotherhood, despite their rejection of the emergency law.
Some groups said they didn't have enough time to prepare for the protest.
The people’s committee, responsible for protecting the square, volunteered to patrol the Ministry of Interior every half hour to protect it from any possible attack.
"We want to avoid what happened last week and show the government that the protesters are peaceful and don't want any violence," Mohamed Desouki, coordinator in the committee, told DNE.
As tens of thousands marched to and in Tahrir Square on Sept. 9, a group also protested in front of the Ministry of Interior headquarters Downtown. They removed the ministry’s emblem and some protesters reportedly tried to clash with guards stationed inside.
Later protesters stormed part of the Israeli embassy after destroying a recently erected wall along the street on which the embassy is located. Clashes erupted between protesters and police outside the Israeli and Saudi embassies and the nearby Giza Security Directorate leaving three dead and 1,049 injured.
Many of the protesters believed that SCAF allowed the attacks to take place last week, to have an excuse to activate the emergency law clauses.
"The military and police forces intervened at dawn Saturday to secure the Israeli Embassy, although they knew about the attacks on Friday afternoon," said Saleh Ibrahim, 40.
On the other hand, Ahmed Abou Rahma interrupted the protesters, passionately defending SCAF and supporting the reactivation of the emergency law.
"We need the emergency law to face the spreading of weapons and thugs amid the security vacuum we suffer from now," he said.
Others condemned the shutting down of Al Jazeera Mubasher Misr, following the implementation of the amendments on the emergency law, in addition to the military trials of civilians.
"They closed Al Jazeera channel and they want to gag our mouths," said Mervat Hassan, 54.
Protesters said they revolted in order to get rid of the emergency law not reactivate it.
Cars fought their way through Tahrir Square as the protest continued. There was no sight of any police or military officers in the square.
Dozens of family members and supporters of Sheikh Omar Adel Rahman, known as the ‘blind sheikh’, marched through the square demanding his release, after being detained in a North Carolina prison for 18 years.
He was the spiritual leader of men convicted in the 1993 World Trade Center bombing.
"My father was falsely accused of inciting the explosion of US military facilities and the attempted murder of ousted president Hosni Mubarak during his visit to the US," Abdel Rahman's son, Hassan, told DNE.
Abdel Rahman, dubbed by his family as the "Godfather" of Al-Gama'a Al-Islameyya, was an outspoken critic of Mubarak's regime, to which his supporters attribute his detention.
His son claimed that six high ranking officers asked him on Sunday to end a month-long sit-in outside the US embassy, after the recent activation of emergency law clauses.
"We told them that we won't end this sit-in until my father is released," Hassan said.
Tweet
Pope Shenouda Article