Egyptian Copts to leave denomination in protest over remarriage 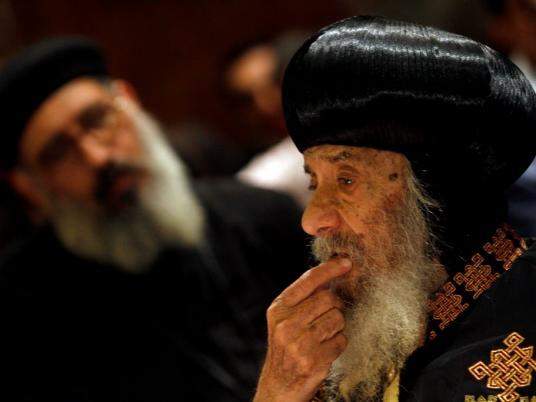 In what they described as an “unprecedented” step in the history of Egypt’s Coptic Orthodox Church, a group of Coptic Christians on Thursday declared their intent to leave the denomination in protest at the Church’s objections to the amendment of divorce regulations.

The four-month-old Coptic group "Right to Live Movement" organized a protest outside Cairo’s Justice Ministry on Thursday, demanding that Copts be given the right to divorce and remarry. During the protest, a group of Copts added their names to a list declaring their withdrawal from the Coptic Church, the first of its kind in the Church’s history.
Twenty-nine people signed the list during the protest; the list is also being circulated online.
Since his ascendance to the Coptic Orthodox Papacy in 1971, Shenouda III has restricted divorce to cases of adultery or conversion to another religion or to a different Christian sect, amending a 1938 bylaw that permitted Copts to divorce on the grounds of impotence, abandonment, abuse, and mental disability.
As a result, Christians in unhappy marriages who wish to divorce, but in which adultery is not a factor, face a stark choice: either fabricate an adultery claim or convert.
Right to Live member Rasha Sadeq told Al-Masry Al-Youm that the Justice Ministry has not acknowledged nor responded to the demands lodged by the movement’s protesters since July.
These demands include the right to a civil marriage in a registry office for those already divorced, without the need to acquire permission from the Church, and the right to divorce through a notary if both parties agree.
They also signed a “legal document” addressed to Pope Shenouda, in which they declare that the Orthodox Church’s strictures – particularly with regard to divorce and remarriage – no longer apply to them.
The movement drafted the document declaring withdrawal from the Orthodox Church along the lines of Egypt’s Constitutional Declaration, which guarantees the freedoms of opinion and belief.
Founder of the Right to Live Movement Ayman George said that the withdrawal from the Church was a “legal way out” of the problem of divorce and remarriage.
George explained that the document declaring their withdrawal will be taken to a court, which will then notify the Orthodox Church of the decision to leave the Church. Applicants will then be given a stamped document that can be used in court to establish a difference in sect between the spouses, thus providing grounds for divorce.
Where there is a difference in sects, Egyptian law states that Islamic Sharia applies, and the right to divorce is granted.
At Thursday’s demonstration, all protesters emphasized that leaving the Orthodox Church does not mean leaving the Christian faith.
Osama Farag, a protester who is himself seeking the right to divorce, described himself as an “Egyptian Christian with no sect.”
“If the Church won’t let me divorce, I have no choice but to try for a civil divorce and marriage,” said Sameh Abdel Malak, adding that he is being denied a divorce despite his wife allegedly committing adultery.
“I know the papers might be wrong [in the view of the Church], but what matters is that things will be right between me and God,” Abdel Malak said.
The question remains, however, whether the document declaring that a Copt has officially left the Orthodox Church will be recognized by the authorities when he or she attempts to remarry. Sadeq said that this has so far not been tested.
The Right to Live Movement was formed in June 2011 to campaign for the right to civil marriage and divorce for Coptic Orthodox Christians. It has roughly 700 members.
The Coptic Orthodox Church claimed in 2010 that Egyptian courts had been reviewing around 4000 cases of Copts seeking to divorce, while an independent study said that up to 160,000 were under review as of the year 2000.
Tweet
Pope Shenouda Article