Egypt's emergency Law in place until next June 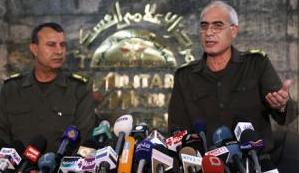 CAIRO (Updated) - Egypt's state of emergency will remain in place until June 2012, a military official said Wednesday, stressing that the ruling Supreme Council of the Armed Forces (SCAF) seeks to "end the emergency as soon as possible".

"The SCAF did not extend or declare the Emergency Law, whose most recent two-year extension, in June 2010, means it is valid until next June," said General Adel el-Mursi, the head of the Military Judicial Authority. He added, however, that "the SCAF seeks to end the emergency state as soon as possible, whenever the circumstances are right for this". El-Mursi pointed out that the approval of the new Constitutional Declaration last March indicated that all laws and regulations in place before the declaration are both valid and respected. Field Marshal Hussein Tantawi has amended some articles in the Emergency Law, widening its scope, in order to restore security in the country after the recent attack on the Israeli Embassy. "Tantawi has practised his authority according to the Constitutional Declaration ratified on March 30. He has amended the law to restore stability and security, promising to cancel it when security improves," el-Mursi explained. The military had promised that parliamentary elections, due by the end of the year, would not be held under a state of emergency. The semi-official newspaper Al-Ahram reported Wednesday that the SCAF is looking into a proposal for a public referendum on a suitable electoral system and extending the Emergency Law, which has been continuously in place since Islamists assassinated President Anwar Sadat in 1981. Major political parties, in response, have expressed their wide opposition to the proposed referendum. They include the Muslim Brotherhood's Freedom and Justice Party, Al-Wafd, the Democratic Front, and an alliance of 35 Islamist and liberal parties, as well as a newly founded bloc of revolutionary groups and political parties. Political parties and movements have sharply criticised a draft election law with its new distribution of electoral constituencies and the division of parliamentary seats between party lists and individual candidacy. They fear that an individual candidate voting system might allow loyalists to former president Hosni Mubarak to run in the parliamentary elections. Tareq el-Bishri, the head of a constitutional panel which prepared amendments included in the current Constitutional Declaration, dropped a bombshell, when he described the referendum as being a must. "According to Article 59 of the Constitutional Declaration, the Emergency Law cannot be extended until a referendum is held," el-Bishri, a former deputy chief of the State Council Courts, said, blaming the SCAF for delaying the polls.