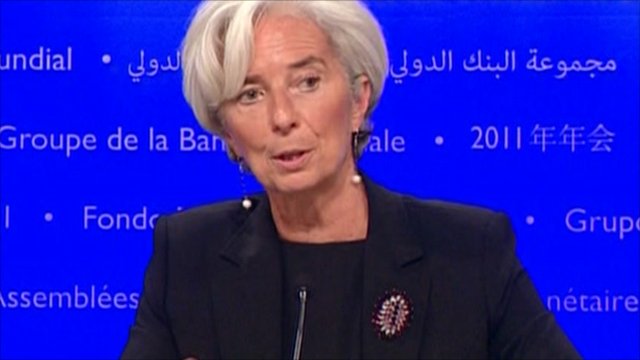 The IMF says it will take decisive action to tackle the eurozone debt crisis and support the global economy.

In a communique on Saturday, the global lender said it would review the resources it had available to tackle the crisis.
The statement added that eurozone nations would do "whatever necessary" to resolve Europe's debt crisis.
Following the statement, UK chancellor George Osborne said there was "no plan" for a Greek default.
However, the communique, issued during a meeting between G20 finance ministers, the IMF and the World Bank, did not give specifics on whether extra funds would be available to the global fund.
"Our lending capacity of almost $400 billion looks comfortable today but that pales in comparison with the potential financing needs of vulnerable countries and crisis bystanders," said IMF managing director Christine Lagarde in an action plan presented to the fund's policy steering panel.
The IMF's statement also called for governments to take steps to shore up the banking system.
Banks holding large amounts of European sovereign debt have come under pressure from investors concerned about losses if those debts are not repaid.
"Advanced economies will ensure that banks have strong capital positions and access to adequate funding," said the communique.
The IMF, it said, would develop mechanisms to assist troubled financial institutions working across national borders.
Mr Osborne said eurozone members had agreed on the need to take decisive action to tackle the crisis.
Speaking in Washington, the chancellor said allowing Greece to default on its debts was not one of the proposals.
"No-one here has put forward a plan for that," said Mr Osborne.
The weekend meeting comes after another week of volatility on the world's share markets.
In Europe, the main share indexes in London, Paris and Frankfurt all fell about 4% over the week.
Market fears
The IMF statement follows a similar communique from the G20 group of leading economies on Friday.
The G20 committed "to take all necessary actions to preserve the stability of banking systems and financial markets as required".
It said it would follow up this pledge with a "bold action plan" at the beginning of November.
That statement left many analysts uncertain as to the direction of policy.
"The statement from the G20 last night may have taken the edge off the current bitter market sentiment, but the reassurances from the finance ministers lack substance," said Jane Foley at Rabobank.
"Until politicians back their actions with words in respect to moving closer to a solution to the eurozone debt crisis, markets will continue to worry about a messy and painful outcome from the eurozone debt crisis."
Governments have so far given little hint of what action they may take, but markets have long been calling for a substantial increase in the eurozone's communal bailout fund, the European Financial Stability Facility (EFSF), from its agreed level of 440bn euros ($596bn; £385bn).
Many investors also want the eurozone to issue bonds guaranteed by every one of the 17-member nations - so-called eurobonds. However, a number of policymakers, particularly those in Germany, have resisted the idea.
In July, European finance ministers proposed making the EFSF more flexible, allowing it to buy individual government bonds - which would bring down the cost of borrowing for heavily indebted nations - and to offer emergency credit lines to banks. However, the proposals have not yet been ratified.
The IMF said it was critical that this agreement be implemented.
Sense of urgency
Analysts say far swifter action is needed in order to soothe investors' jittery nerves.
Jim O'Neill, chairman of Goldman Sachs Asset Management, suggested this weekend's meeting in Washington could mark the beginning of concerted action to tackle the debt crisis in Europe which is the cause of so much stock market volatility.
"The thing that really brought the world to a better place in 2008 was genuine collective action involving both the developed and the developing world through the G20," he told the BBC.
"The fact that they're all there together in [Washington] DC this weekend should lay the framework for thoughts about quite significant actions... sometime between now or possibly at the November G20 in France."
Tweet
Pope Shenouda Article