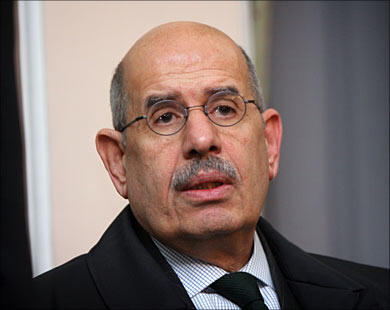 CAIRO: Mohamed ElBaradei was in his hometown of Ibyar in Al-Gharbeya governorate on Friday to “visit family,” according to the press office of the campaign supporting ElBaradei as Egypt’s next president.

Rania Azab, director of the campaign’s press office, refuted media reports that the former IAEA chief would officially announce his candidacy during his visit. Many perceived the visit as the launch of his campaign trail.
ElBaradei visited his hometown on Friday to a warm welcome from the residents who chanted “ElBaradei is our President,” “Our President is from Ibyar” and “Change, freedom and social justice.”
“This visit is not even part of his campaign, he’s merely visiting family members in his hometown,” Azab told Daily News Egypt.
“All media reports claiming otherwise are false,” she added.
Azab said that people gathered around ElBaradei as a renowned public figure, but he wasn't planning on holding a public conference or campaigning.
ElBaradei attended Friday prayers alongside Ibyar residents in El-Hatmeyya mosque.
“Let our motto in the coming period be ‘we are all one hand in achieving justice, equality, freedom and social justice,’ which are the principles of our Islamic religion,” ElBaradei said following prayers.
According to the Twitter account of ElBaradei’s presidential campaign, he sat with residents from Ibyar to discuss the future of Egypt.
“I’m working with a number of experts to put a practical program in all fields and simplifying it, so it can reach the man on the street,” the Twitter account quoted ElBaradei as saying.
Tweet
Pope Shenouda Article