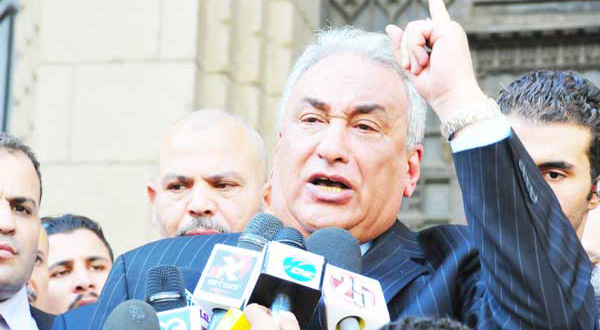 CAIRO: Following an altercation with reporters, lawyers representing the families of martyrs killed during the January uprising reiterated demands made in court on Saturday to move the case against Mubarak and his ex-security chief and six of his aides to another court, during a press conference at the Court of Appeals on Sunday.

According to the lawyers of over 840 civil rights complainants, Field Marshal Hussein Tantawi, head of the army council and the de facto ruler of Egypt, arrived at court to testify earlier than usual and left the courtroom without allowing them to cross examine him.
Lawyers said that the hearing began at around 8.45 am, over one hour ahead of the time they expected. They said the courtroom doors were locked shut after Tantawi entered.
“Why did the court spend three hours questioning former Interior Minister Mahmoud Wagdy and the current minister Mansour El Essawy, while only questioning Tantawi for 40 minutes?” Abdul Aziz Amer told reporters.
Amer was delegated by other lawyers to file a challenge, insisting that presiding Judge Ahmed Refaat be replaced.
The motion brings the case that began on Aug.3 to a halt. The Court of Cassation will decide on whether to sustain the challenge on Monday, in which case the trial will start from the beginning under a new judge. If the challenge is dismissed, the case will resume in the same court on Oct. 30 when Military Chief of Staff Sami Enan is expected to take the stand.
According to lawyers, the judge has complicated case by banning the live broadcast of the sessions.
“We don’t want anyone to think that we are wasting time, we are trying to protect the rights of the martyrs which means a fair trial,” lawyer Sameh Ashour told reporters during the press conference.
Many of the lawyers complained that the court was not neutral, claiming that the presiding judge is unfair to them, acting in favor of the defense lawyers.
“There are many reasons why we insist that the judge must be replaced,” said Amer, adding that he threatened them with “arbitrary decisions” if they fail to organize their requests.
Amer also cited their inability to address Tantawi on Saturday as the court ordered a closed session
He also cited the unusual security measures which resulted in their delay, hence leading them to miss the session.
Only a few lawyers were allowed access, including Ashour, the former head of the Lawyers Syndicate.
Ashour told reporters that lawyers were intentionally subjected to thorough screening procedures to obstruct their access to the courtroom.
One lawyer, who spoke on condition of anonymity, told DNE that Tantawi was asked over 20 questions only two of which by the civil rights lawyers, adding that Tantawi said he did not attend meetings that could have been decisive to the prosecutor’s case.
According to the lawyers who were present in the court, Tantawi’s personal guard roughed up one of the lawyers.
Ashour submitted a request to the court to document the incident but the court refused.
The lawyers say that will continue pursuing the release of video footage that was not erased proving that snipers shot live ammunition at demonstrators during the uprising.
Egyptian Intelligence had allegedly sent a letter to the assistant prosecutor general saying that it possesses tapes of footage of Tahrir Square between Feb. 1 and 3.
The letter also said that the footage taken from Jan. 25 to Jan. 31 was erased when other footage was taped over it.
“We will not relent on obtaining these tapes because we are sure that the ruling military, the prosecutor, the ministry of interior and the general intelligence have secret copies that they hide,” claimed Ashour.
He told reporters that lawyers representing the martyrs’ families are not seeking financial rewards but rather retribution and justice for the martyrs.
Tweet
Pope Shenouda Article