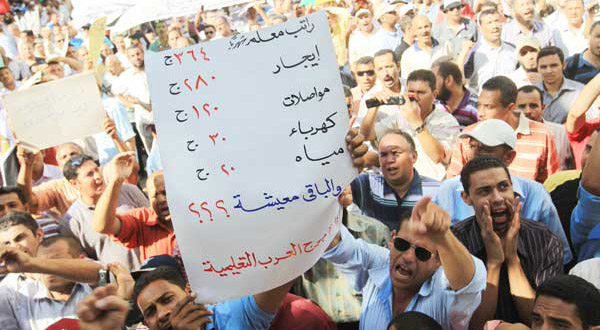 CAIRO: Public school teachers decided to suspend nation-wide strikes for one week until the education ministry presents a timeline for meeting their demands following a mass protest on Saturday.

But teachers in some schools in Beni Seuif, Sharkiya, Suez and parts of Cairo continued the strike pending “positive steps” by the ministry, said Hala Talaat, activist and teacher.
Thousands of teachers protested outside the Cabinet building Saturday calling on the Minister of Education to step down, following a partial week-long strike across the country.
Teachers have been on strike since the start of the academic year on Sept. 17. While the ministry has downplayed the size of the strike, activists said it was across the country.
A number of teachers have reportedly prevented students from entering certain schools.
The strike came on the heels of a protest on Sept. 10, when thousands demonstrated outside Cabinet to voice their demands.
Teachers are demanding better pay and working conditions and greater government investment into what they believe is a notoriously overburdened educational system.
The demands include the resignation of Education Minister Ahmed Gamal El-Din Moussa, the payment of a promised 200 percent incentive, and hiring teachers on temporary contracts. Teachers have also asked for a minimum wage of LE 3,000.
On Saturday, the demonstration blocked traffic on Qasr El-Einy and Magles El-Shaab Streets, leading to a complete block in downtown Cairo.
The ministry of education announced that only 2.6 percent of all schools in Egypt participated in the teachers’ strike, which led to more teachers to join, resulting in an approximate 80 percent participation by teachers country-wide, according to sources at the Socialist Research Center.
Eman Nabhan, a teacher at Moshtahar Boys Schools claimed that every school had at a least one teacher on strike.
The Minister of Education said that teachers’ demands were legitimate, but that the current budget limitations stand in the way of meeting them.
Prime Minister Essam Sharaf said that meeting teachers’ demands along with those of other public sector employees would be difficult.
Teachers say their net salary does not exceed LE 287 which is why they give private lessons, a phenomenon attributed to the deterioration of the system.
“It is a corrupt system that the parents got used to; even if we don’t want to give private lessons to our students the parents would come and force us to do so,” said Naglaa Soliman, teacher at Moshtahar Girls School.
Teachers, students and parents complain of overcrowded classrooms and dated curricula.
In a pamphlet that was distributed in different governorates, the Independent Teachers’ Union said it called for the strike not only for financial benefits but also to improve conditions for students.
“We care about our social standards as well. We are teachers, we educated the past generations and we will educate the future ones, but how can we do so if we are not respected,” said Mohamed Osman, a teacher on strike.
On Saturday teachers said the minister and his advisors should be removed before negotiations. They threatened to escalate by starting an open-ended sit-in outside the Cabinet building.
Teachers said they are increasingly frustrated with Cabinet’s “slow” response, and with continuous threats of dismissal and imprisonment by ministry officials citing a law criminalizing strikes.
“The right to strike is an official right for any human being,” read a banner in Saturday’s protest.
Strikers called for “social justice, which is why we are in front of the cabinet; we want justice,” said teacher Mohamed Osman.
Tweet
Pope Shenouda Article