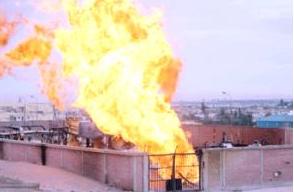 At least three gunmen in a van opened fire on a gas installation before an explosion hit the pipeline near the town of al-Arish in the north of the Sinai peninsula, witnesses said.
It was the sixth such attack on the pipeline since Egypt's former president Hosni Mubarak was toppled in February. It carries gas through the Sinai and on to Jordan and Israel.
Previous attacks have already disrupted gas deliveries to both countries several times, but it was not immedaitely clear what impact the latest attack would have on supplies.
Army experts have also located and defused a number of other devices targeting the pipeline.
And last month, four armed men were arrested as they tried to blow up the gas terminal near al-Arish. The same month, Egypt stepped up its police and army patrols in the Sinai to try to protect the pipeline.
Egypt supplies 43 per cent of Israel's natural gas and 40 per cent of Israel's electricity comes from this source.
The latest blast comes against a background of rising tension between Egypt and Israel.
On August 18, Israeli troops killed five Egyptian policemen as they chased militants along the border. That incident followed a series of desert ambushes that killed eight Israelis.
Egypt has asked Israel for an official apology and demanded a probe into the deaths.
At the time, outraged Egyptians staged huge protests outside the embassy and called for the expulsion of the Israeli ambassador.
Then overnight on September 9-10, crowds smashed through an external security wall, tossed embassy papers from balconies and tore down the Israeli flag.
Three people were killed and more than 1,000 wounded, including 300 policemen, during the clashes between protesters and the security forces outside the embassy.
It was the worst incident since Israel set up its mission in Egypt, the first Arab country to sign a peace treaty with the Jewish state in 1979.
Tensions ratcheted up another notch when on September 15 Egypt's Prime Minister Essam Sharaf said the 1979 peace treaty with Israel "is not sacred".
Israel's foreign ministry summoned the Egyptian ambassador over the comments.
On Friday, Israeli units deployed along the southern border with Egypt were ordered on "high alert" for fear of a "terrorist attack", an army spokeswoman said.
Israeli Prime Minister Benjamin Netanyahu's office has in recent weeks repeatedly warned Israelis to avoid travelling to Egypt.
The new regime in Cairo is in the process of reviewing all its gas contracts with Israel signed under Mubarak.
Tweet
Pope Shenouda Article