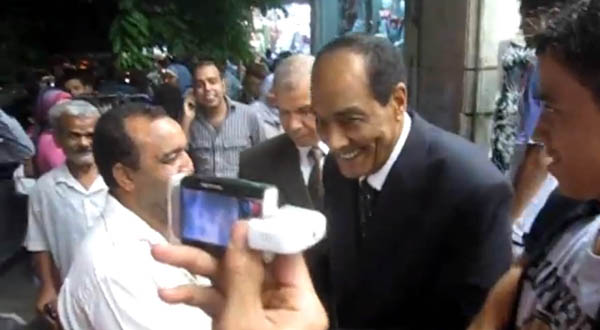 Tantawy took a stroll in Cairo's Downtown area on Monday night wearing a business suit and with no personal security in tow.
The unusual sight, a picture of which appeared on the state-owned Al-Ahram's front page, set social networking sites ablaze with jokes and commentary.
That's "Tantawy handing power to 'civilian rule'," wrote Adel on Twitter.
"The field marshal wears military uniform to try revolutionaries in military court, and now he wears civilian clothes to rule the people," wrote a user who calls himself MrKimooo.
Tantawy heads a junta of military officials known as the Supreme Council of the Armed Forces (SCAF) that took power when president Hosni Mubarak was ousted by a popular uprising in February.
SCAF has promised to oversee a transitional phase before a handover to civilian rule.
The military, who were hailed as heroes at the beginning of the uprising for not shooting protesters, have come under repeated criticism for their lack of transparency and for alleged human rights abuses.
Protesters have been taking to the streets for several months to demand the end of both military rule and military trials of civilians.
Tantawy's late night walkabout came two days after he gave closed-door testimony at Mubarak's murder trial, which was criticized on social networking sites when details were leaked.
Tweet
Pope Shenouda Article