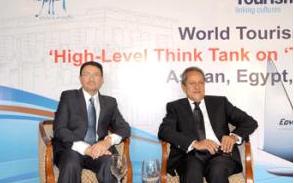 In his speech, the Egyptian minister emphasised that the tourism industry, whether in its cultural, social or economic aspect, is the backbone of the national economy.
Addressing international celebrities, who took part in the opening ceremony, Abdel-Nour highlighted the role of the tourism industry in providing jobs, helping to preserve traditions and heritage and saving the environment.
In an acknowledgement of Aswan's history as a hub of the world's ancient civilisations and many cultures, UNWTO decided to launch this year's great tourist event in the renowned and beautiful Upper Egyptian town. This year's global festivities unfurled the banner 'Tourism linking Cultures', to heighten the values of mutual understanding and respect and global peace.
Abdel-Nour emphasised that discussions to be held during meetings and seminars planned on the sidelines of World Tourism Day in Aswan would be fruitful and result in recommendations to help the tourism industry to successfully overcome its global and regional adversities,
The UNWTO Secretary-General Taleb Rifai began his speech by quoting the words 'You are safe when you come to Egypt', the motto that greet visitors at airports, seaports and on the borders.
Rifai paid tribute to the time-honoured values for which the Egyptian people are famous, including their hospitality and warm welcome given to foreign visitors.
The UNWTO secretary-general thanked the Egyptian officials for the fascinating opening ceremony with Pharaonic monuments and outstanding landscape constituting an awe-inspiring background.
He remarked that UNWTO had been keen to organise this year's World Tourism Day in Aswan to lend support to Egypt, which had gone through difficult times. In his speech, Rifai did not deny that the outbreak of the Arab Spring had had an impact on the flow of tourists to the Middle East region.
In its Aswan Recommendations, UNWTO stressed the organisation was increasing its efforts to maximise tourism's role in linking cultures.
The Aswan Declaration highlights that, with 940 million international tourist arrivals today, the tourism industry is not just one of the world's largest and fastest growing economic sectors, it is also one of the world's principal mean of for human interaction.
According to UNWTO's statutes: “The fundamental aim of the organisation shall be the promotion and development of tourism with a view to contributing to economic development, international understanding, peace, prosperity, and universal respect for, and observance of, human rights and fundamental freedoms,” which is reflected in the Aswan Declaration.
Tweet
Pope Shenouda Article