Egyptian Christian Girl Banned From School For Not Wearing a Veil 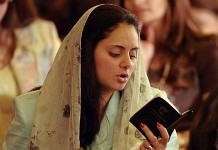 (AINA) -- A Christian girl was prevented for over a week from entering her school in Beni Mazar, Minya province, because she refused to wear a veil. "The school management described her as 'flaunt' for not covering her hair," said Coptic activist Nader Shoukry, who uncovered the story.

"Coptic students were forced to obey for fear of the school management's threats," said Mr. Wagdy Halfa, the attorney for the girl, "except for 14-year-old Ferial Sorial Habib, whose family refused this decision because it is inconsistent with religious freedom and a blatant Islamization of education."
Ferial was prevented from entering her school by the social worker, Ms. Ola Abdel Fattah, for eight consecutive days.
Her father went to school on September 17 to protest this decision, but the school filed a police complaint against him on charges of libel and defamation.
Mr. Wagdy Halfa, the student's attorney, said the school administration of Shaikh Fadl Secondary School, a public school in Bani Mazar, had sent a warning to Christian students compelling them to wear a head dress, similar to the Hijab, and not to reveal their hair, otherwise they would be refused entry to school.
Ferial's father filed a formal complaint with the state attorney and another with the Department of Education of Bani Mazar, stating the school has turned into a "hotbed of militants" and has acted out of its legal scope by forcing on students what is not specified by law or in the educational guidelines. He asked the authorities to investigate this incident.
According to attorney Halfa schools are only allowed to choose the color of the uniform. He warned of the seriousness of the incident as it confirms the Islamist program to take control of the education system and impose the veil on Christian women.
Activist Nader Shoukry recalls a similar incident which took place in 2010 in a secondary school for girls in Ayat, Guiza province. In that case human rights organizations which stand against the Islamization of education took the matter up, which was investigated and those responsible were transferred from their posts.
Appearing on Coptic TV Channel on September 25, Halfa said "the school is ready to allow the student to go back to school but only on an 'amicable' basis and not through 'administrative prosecution,' but her father and I objected."
"This is a matter that cannot kept quiet or resolved by 'reconciliation.'" said Shoukry, "It has to be taken up by rights organizations."
Said Abdalmaseeh, director of the Egyptian Center for Development and Human Rights, presented a complaint yesterday to the Prime Minister and to the Minister of Education, calling on them to legally respond to the school's actions, to allow the Coptic student to attend school, and issue instructions to all schools that wearing the veil is optional and not mandatory.
The Zurich-based European Union for Coptic Human Rights Organizations has sent a formal request to the Egyptian Minister of Education, demanding an investigation of the Bani Mazar school incident.
Tweet
Author