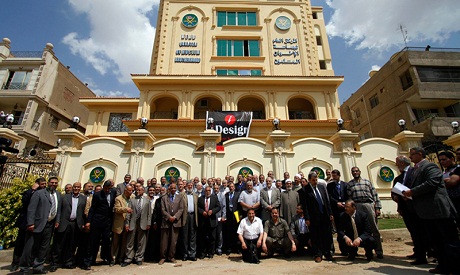 The leadership of Egypt’s Muslim Brotherhood will reportedly discuss the possibility of nominating a presidential candidate at a group meeting scheduled for Friday. Some observers say the move is indicative of a political dilemma for Egypt's largest and most influential Islamist group.

"The Muslim Brotherhood is stuck,” said one Brotherhood source. “It needs to find an exit from its current dilemma by finding a presidential candidate it can throw its weight behind."
The group’s leadership is reportedly furious that expelled member and presidential contender Abdel-Moneim Abul-Fotouh is finding significant support from among the Brotherhood’s young cadres, and that his overall popularity appears to be growing, even among Coptic-Christian quarters.
Worse still for the Brotherhood, Mohamed Selim El-Awa, a lawyer and Islamic thinker who the group was hoping to back along with the ruling Supreme Council of the Armed Forces (SCAF), is not finding much support.
"It’s not that he’s without supporters," the source said, but an honest assessment of El-Awa's prospects "is not exactly encouraging."
The source also admitted that the SCAF's reluctance to throw its weight behind El-Awa had been due to his disappointing post-revolution political performance and popular criticisms of his close association with Sudanese President Omar Bashir who has been accused of committing war crimes.
In addition, Brotherhood sources say they would not support Mansour Hassan, current chairman of the SCAF's advisory council. Hassan’s recent entry into the presidential race raised eyebrows due to his advanced age and confusion over the support extended to him by the liberal Wafd Party, which remains divided on the matter.
Nor, according to the same sources, is the group planning to support former Arab League Secretary-General Amr Moussa, who currently enjoys high marks in several independent opinion polls.
"We know the SCAF doesn't want Moussa. And he’s not a face of the revolution that we can promote against Abul-Fotouh," said a Brotherhood source.
Independent political sources say there has been a systematic attempt by the SCAF to hinder Moussa's campaign.
In the words of one informed source, the SCAF “is making direct calls on several political groupings and parties not to publicly support Moussa and to instead give their backing to Mansour Hassan."
The Wafd Party initially promised to support Moussa before partially redirecting its attention to Hassan. It has now frozen any initiative to support a particular candidate.
Other political parties have also been pressured by the SCAF to halt shows of support for Moussa, according to various party sources.
Meanwhile, the Brotherhood is reportedly pressuring groups planning to support Abul-Fotouh.
The Brotherhood and the SCAF both oppose Abul-Fotouh and Moussa. Their shared concern, say political observers, is the lack of an alternative candidate.
"The call for a consensual candidate is almost dead. The attempt to promote [Arab League Secretary-General] Nabil El-Arabi failed, and Hassan isn’t going over well," said Amr Hashem Rabie, a senior political analyst at the Cairo-based Al-Ahram Centre for Political and Strategic Studies.
Rabie added that it was too late “for any other political groupings to nominate a candidate today. And this goes for both the SCAF and the Brotherhood."
Khairat El-Shater, the Brotherhood's number two, "won't be the dark horse in these elections," said one source.
El-Shater, an engineer who controls the group's finances, is too shrewd to want to be Egypt’s first post-Mubarak president due to the daunting challenges facing the country, according to the same source.
Meanwhile, other leading Brotherhood figures who might be considered at Friday's meeting – including Mohamed Morsi, head of the group's Freedom and Justice Party – are unlikely to garner serious support from the group's younger cadres or the broader public.
A presidential shortlist drawn up on Thursday includes names both from within and without the Brotherhood, according to a source.
"But there’s a good chance that the group ultimately won't nominate a candidate, due to the difficulties he will have making serious headway," said an informed source.
According to Rabie, there are two scenarios now for how the presidential race will play out. The first is for two of the strongest candidates to run together as president and vice president; the second is for the SCAF to use its weight and authority to promote the candidate of its choice, possibly Hassan.
"I think the ‘dark horse’ won’t be a single candidate, but a ticket that brings together a candidate for president and another for vice president," Hashem said.
Human rights activists, meanwhile, are already voicing concern over the possibility of vote rigging, and are currently working on a scheme to monitor the polling. They realise their reservations will likely be ignored by the SCAF-appointed Higher Presidential Elections Commission, however, the decisions of which cannot be subject to appeal.
Tweet
Pope Shenouda Article