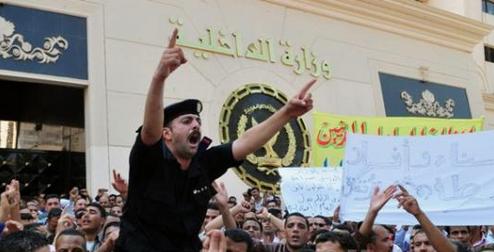 Dozens of low-ranking police officers staged a protest outside the Interior Ministry Thursday to demand higher salaries, promotions, relocations to districts outside of where they live and the cancelation of military trials of police officers.

“I have been working for the police department for many years, I was promoted, but I and my colleagues have a lot of other rights, like higher salaries, promotions based on equality and not nepotism, relocation to other districts, and not facing military trials,” said low-ranking police officer Hamdy Mohamed.
An official source at the Interior Ministry told Al-Masry Al-Youm that the ministry submitted a draft law cancelling military trials for police personnel to the cabinet’s legislative committee to approve and submit to the People’s Assembly.
The source added that a committee had been already formed under former Interior Minister Mansour al-Essawy to study replacing the military trials of police officers with disciplinary committees, and that the committee was done preparing, under the current interior minister, the draft law on abolishing military trials for police to be submitted to the People’s Assembly soon.
The committee is preparing three other bills related to restructuring the Interior Ministry financially and administratively and granting low-ranking police the right be promoted without necessarily obtaining a bachelor’s of law.
Tweet
Pope Shenouda Article