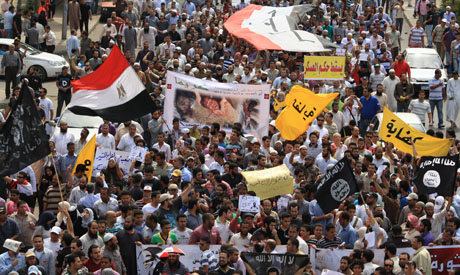 According to a military source, the North Cairo military prosecution has decided Saturday to keep in custody for 15 days pending investigations 300 of those arrested Friday. The accused were arrested following mass demonstrations against the Supreme Council of the Armed Forces (SCAF) at the Ministry of Defence in Abbasiya.

Rights lawer Rajia Omran told Ahram Online that so far lawyers can confirm that 14 women are amongst those arrested and receiving 15-day detention orders. Their release was, however, ordered Saturday as declared by the head of the military prosecution, Adel El-Morsi.
Omran says hundreds of men remain in custody, their exact number unknown to lawyers but estimated to vary between 300 and 400. According to MENA, the deputy head of the military policem Major Ibrahim El-Damaty, confirmed the number of arrested Friday to be 319 in total.
Accusations faced by those arrested include infringing upon state institutions, using violence against members of the armed forces, halting traffic, illegal gathering and having been found in a restricted military area.
While lawyers were able to enter the military prosecution headquarters Saturday, activist gathered in solidarity with the arrested were violently dispersed by military police using batons and sticks. At least three were again arrested and two, one male and one female, received heavy blows to the head, causing bleeding.
Entrances to the C28 military prosecution headquarters were completely sealed off by military police forbiding anyone to enter. Protesters in response regrouped in an adjacent main road, repeating their chants against military rule.
Military statements continue to defend the Friday mass arrests claiming no peaceful demonstrators were detained and that protesters were attempting to break into the Ministry of Defence.
Eyewitness accounts, however, claim otherwise, saying activists were arrested from several parts of the Abbasyia district, including its nearby hospitals. Ola Shahba from the Justice and Freedom Youth Movement confirms she received a phone call from activist Halim Henish saying he was hiding from the military under one of Ain Shams Hospital's beds.
"Halim called us first to tell us he was accompanying an injured friend to the hospital. He then called us a while later telling us the military attacked the hospital and that he was hiding under one of the beds fearing he would get arrested," said Shaba.
Minutes later, Shahba received a message from Henish learning he was in fact arrested together with Mohamed Hazem, the injured he was accompanying who suffered a broken leg. She added that another member of their movement, Ahmed El-Masry, is currently facing interrogation at the hospital while suffering from two live bullets to his leg.
Tahrir Doctors, a group of medical doctors who voluntarily aid those injured at protests, stated on their official site that at least two had died at the Zahara Hospital in the Abbasiya area due to gunshot wounds. Two more at the same hospital, according to the statement, remain in critical condition after being shot too.
The military denied the use of live ammunition on protesters and announced that an Egyptian army soldier Samir Anwar Samir was killed suffering from a gunshot wound to the stomach.
SCAF issued, in a televised statement Friday night, a curfew in the Abbasiya area between 11pm and 7am after clashes between protesters and military police left 373 injured and at least two dead outside of the Ministry of Defence in the Eastern Cairo district.
Tweet
Pope Shenouda Article