The rule of SCAF is coming to an end 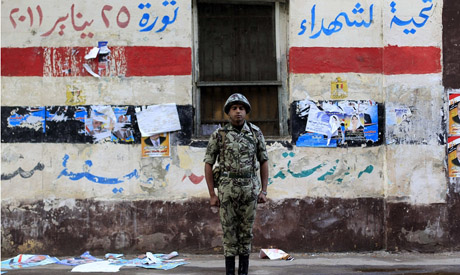 "I'll believe it when I see it, but I am not really convinced that they will go completely. They'll have the (presidential) elections on time because they know that otherwise they would face trouble. But they will find a way to keep interfering," said Nabil, a retired civil servant. commenting on the imminent end to the rule of the Supreme Council of the Armed Forces (SCAF).

On 11 February 2011, when ousted president Hosni Mubarak succumbed to public pressure and stepped down from power he delegated his authorities to SCAF, after having tried to pass the same to Omar Sulieman, who was briefly appointed vice president — a bid to placate revolutionairies that failed.
When Mubarak stepped down the sentiment in Tahrir Square was one of joy. Few questioned the modalities of the power transfer; after all, it was the army, many thought, that had made Mubarak's departure possible when its leaders — SCAF — declined to quell the demonstrations after the police force disintegrated.
Indeed, since the early days of the January 25 Revolution, SCAF issued a statement expressing support for the "legitimate demands" of the demonstrators. Thus, when the first units of the armed forces arrived to Tahrir Square during the first week of the revolution, demonstrators chanted "The people and the army are one hand!" And with the military salute offered to the martyrs of the 18-day uprising during the first statement made by SCAF following Mubarak's ouster, the overall public sentiment was that "the army forced Mubarak out."
"And it is very true in a sense. They told him that they wouldn't attack the demonstrators and they did ask him to step down," said a former official at the president's office in the days of the revolution.
However, the rationale behind the army's stance was not exactly the same rationale of the demonstrators. "What SCAF sympathised with clearly was public resentment against attempts to impose Gamal Mubarak (the younger son of president Hosni Mubarak) on the presidency. The army, and not just its leadership, thought it offensive that this guy, whose only distinctive was being the son of a president, to be one day the commander-in-chief of the armed forces," the same presidential official said. He added: "Actually, this was the sentiment of many people and we thought that once Mubarak was removed from office, and once the issue of succession was closed, things would settle down."
According to Emane, a 29-year-old activist, when she went to Tahrir Square on 25 January she "never thought for a minute that things would reach a point whereby we would call for the end of Mubarak's rule. We thought that the maximum we could get was Habib El-Adly (Mubarak's minister of interior)  removed."
However, as events evolved, demonstrators started to call for the end of the regime — not just the rule of Mubarak, or the succession scenario, but an end to the system that defined the state under Mubarak . This, she and other activists say, is "what SCAF is not getting" — "it is what they have been resisting," she adds.
In the analysis of assistants to a couple of SCAF members who spoke to Ahram Online on condition of strict anonymity, "what the revolutionary forces want amounts to the destruction of the state and that when the army took the side of the revolution it did so to protect the state — the country."
But the fallout between SCAF and a wide segment of revolutionary forces goes beyond this disagreement on the concept of change. During the weeks and months that followed Mubarak's ouster, SCAF was over and again criticised by different quarters of the revolution for its political choices and administrative style in ruling the country, especially the seeming close coordination with political Islamist groups.
According to many commentators, 9 October was a watershed. On that day, the army went beyond individual violations of human rights, including disturbing accounts of virginity tests imposed on women demonstrators in March. The army used vehicles stationed in front the State TV building, not far from Tahrir Square, to crush Coptic demonstrators who were protesting the recurrent burning down of churches by radicals who almost always escaped the rule of law.
Mina Daniel, a Coptic face of the 25 January Revolution, was one of the martyrs of that day.
Then there were the equally brutal attacks against demonstrators, who were infiltrated by "criminal elements" according to a military police source, in Mohamed Mahmoud Street and opposite the office of the prime minister not far from Tahrir Square.
Emad Effat, a widely respected moderate Muslim cleric who also took part in the 25 January Revolution, was one of the martyrs of these attacks.
And only late last week there was yet another bloody confrontation, this time in Abbasiya, opposite the defence ministry in East Cairo. But public sympathy for the demonstrators has aso waned. Criticism appears now more against demonstrators than against the army.
Even Nabil who has serious concerns about the army "really abandoning power" is firmly critical of the "attitude of the demonstrators who went to attack the defence ministry for no clear reason." Nabil argues that Abbasiya demonstrations were "pointless" given that the army will soon leave the picture once there is a new president, in a few weeks, and that there is no way demonstrators can force the army to surrender its behind-the-scenes influence.
What SCAF is planning is not clear. An informed source had told Ahram Online that all SCAF members, including SCAF head Field Marshal Mohamed Hussein Tantawi, are planning to retire once a new president takes over. The question that this source did not answer was whether this would be the case no matter who is elected.
The transitional phase that SCAF had promised would last only six months should end 1 July, almost a year and a half since Mubarak's departure, with a new president being sworn into office.
Tweet
Pope Shenouda Article