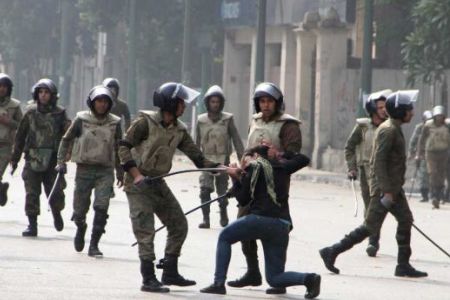 The investigation of Mohamed El-Beltagy and Essam El-Erian stemmed from Oct. 12 clashes between secular groups and members of the Brotherhood’s political party that left over 140 injured. The incident underscored the tensions that have built up between Islamists backing President Mohamed Mursi and secularists who have grown increasingly worried about the Islamists’ hold on government.

Mahmoud’s order comes days after he defied Mursi’s attempt to remove him from office, a move criticized by the judiciary as an attempt by the president to encroach on their independence and authority. Mursi later said Mahmoud would remain in his post instead of being sent off as Egypt’s ambassador to the Vatican.

Calls placed to Beltagy and El-Erian on their mobile phones were not immediately answered. Mahmoud Ghozlan, a spokesman for the Brotherhood, said it was his party’s supporters who “were attacked by thugs.”

“We didn’t attack anyone,” Ghozlan said by phone. “The investigations will prove that.”

The complaints were filed with Mahmoud’s office by at least one female activist who alleged the Brotherhood supporters attacked women at the demonstration.

The clashes occurred as the Brotherhood organized a protest against the acquittal of several top officials from ousted President Hosni Mubarak’s government on charges of involvement in the so-called “Battle of the Camel,” in which protesters were killed during last year’s revolt. Separately, other groups protested both the acquittals and Mursi’s rule.