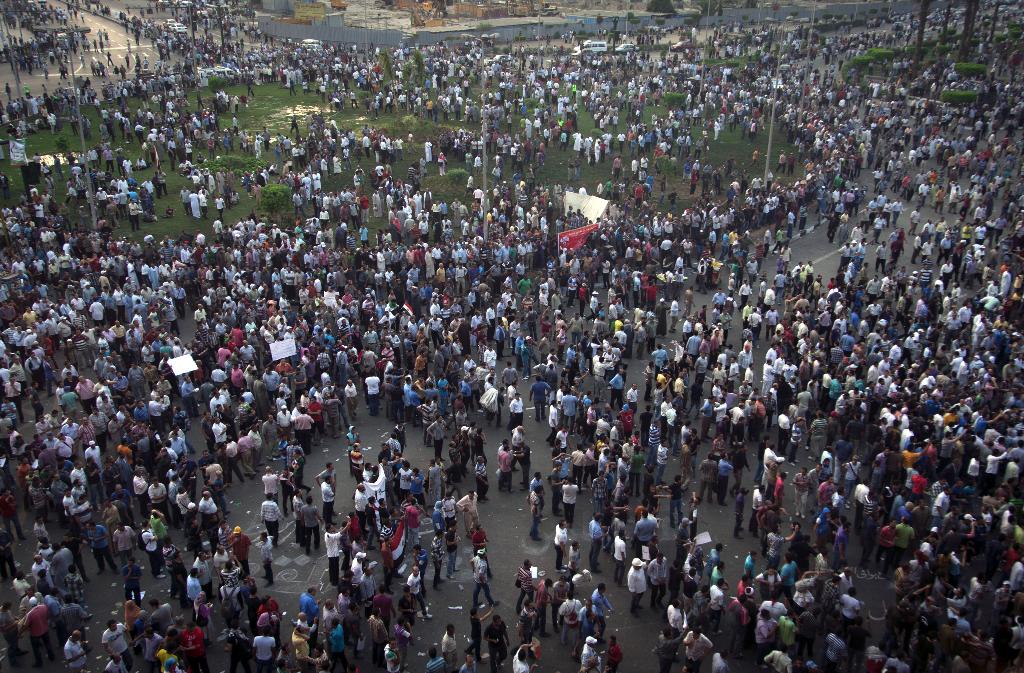 Egypt's highest court lashed out Tuesday at an Islamist-led panel tasked with writing the country's new constitution, saying that some of the proposed provisions undercut the court's mandate and keep it under the president's power.

The work — and the composition — of the 100-member constitutional assembly has been the subject of a fierce debate in Egypt, and the country is still haggling over disputed articles in the charter, some of which will determine the role of religion in the nation's affairs and the independence of the judiciary.
Supporters of the panel drafting the constitution say it was set up by an elected parliament and broadly represents Egypt's political factions. Critics say the process is dominated by a majority made up of Islamists, such as the Muslim Brotherhood from which Egypt's new president, Mohammed Morsi, hails and more radical groups, when it should be determined by consensus.
The panel released a partial first draft of the charter last week in which most of the provisions related to the Supreme Constitutional Court are identical to the outgoing constitution — the president has the right to appoint the head of the court and the rest of its 15 members after receiving nominations from lower courts.
On Tuesday, judges from the SCC held a rare news conference during which they sharply criticized the constitutional panel.
Tahani el-Gibaly, a member of the SCC, said that provisions that touch on the SCC, which rules on the constitutionality of laws, are "disastrous."
El-Gibaly said the constitutional assembly has turned down suggestions to free the court from the president's grip and "ensure its independence" from the country's executive and legislative powers. She said the panel ignored proposals to allow other courts, rather than the president, to select the members of the SCC as well as its chief judge.
One new article introduced by the panel would strip the SCC of the authority to rule on the constitutionality of laws after they are passed by parliament, leaving it only the power to rule on them beforehand.
"The revolution was about ensuring a democratic system, with balanced powers to protect the rights of the Egyptian citizen, but these clauses violate these rights," el-Gibaly said.
The court's chief judge, Maher el-Behiri, told reporters the court is in permanent session in protest.
Maher Sami, the court spokesman, accused Islamists on the panel of trying to "topple the Constitutional Court ... and settle scores between them and the court."
Sami appeared to be referring to the court's decision in June to disband parliament, which was dominated by lawmakers from the Muslim Brotherhood, with its ruling that the election law that oversaw parliamentary polls was unconstitutional. The Islamists responded by accusing the court of being home to Mubarak-era judges.
With so much at stake in the new constitution, the panel writing the charter has come under mounting criticism in recent weeks.
Most of the debate has centered on the wording of the role of Islamic Shariah law, the role of unelected religious scholars in reviewing laws as well as the protection of the rights of women and religious minorities. Liberals and secularists have expressed concern with what they see as a growing role of conservative Islam in the charter, while ultra-conservative Islamists, known as Salafis, are pushing for the strict and full implementation of Shariah law.
That ideological standoff moved to the streets on Friday, when thousands members and supporters of the fundamentalist Muslim Brotherhood group clashed with anti-Islamist protesters denouncing what they say are the Brotherhood's attempts to plant its members in the state institutions and produce a charter that serves the group's agenda.
The constitutional panel has pushed forward with its work, despite a slew of legal challenges to its mandate and its composition. Egypt's High Administrative Court was to rule later Tuesday on whether to disband the panel for the second time.
The first constitutional assembly was formed earlier this year, but liberals boycotted it because of what they said was an attempt by the Brotherhood to pack the body with Islamists. In April, a court disbanded that panel for including lawmakers among members, saying it constituted a conflict of interest.
In June, the current panel was formed but liberals challenged it against with more than 40 appeals, citing the fact that some members of the panel have been appointed in government positions.
If the current panel is also dissolved, Morsi holds the power to appoint a new panel replacing it.
Tweet
Pope Shenouda Article