Syria stands between Egypt and Iran

by the Asia Times Online 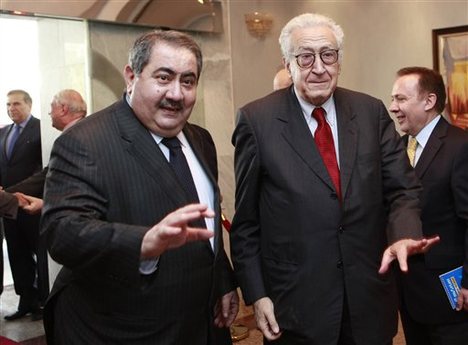 The election of the Muslim Brotherhood's Mohammed Morsi to the presidency this summer was followed by a flurry of conjecture that the restoration of Egyptian-Iranian diplomatic relations - frozen since 1979 - was in the offing. Yet despite some initial indications to this effect, local analysts now say such speculation appears to have been premature.

"Egypt-Iran relations have certainly warmed since Morsi's assumption of the presidency," Mohammed Saeed Idris, expert in Iranian affairs at the Cairo-based Al-Ahram Center for Political and Strategic Studies, told IPS. "But in light of certain factors, not least of which is Egypt's recent declaration of support for the opposition in Syria, the resumption of ties now appears unlikely in the short term."
Over the last decade, Iran has repeatedly expressed its desire to restore ties with Egypt, the Arab world's most populous country. "If the Egyptian government was willing, we would open an embassy in Cairo the same day," Iranian President Mahmud Ahmadinejad famously declared in 2007.
Under the regime of ousted president Hosni Mubarak, Egypt - taking its cue from Washington - consistently rebuffed the Iranian overtures, choosing instead to see the Islamic republic as a "threat" to regional security. But following Morsi's assumption of the presidency in June, many analysts had predicted that the country's new Islamist head of state would move quickly to restore ties with Iran.
In hope of sweetening the deal, meanwhile, Iranian officials had stressed their readiness to pump significant Iranian investment into Egypt's economy and work on boosting bilateral trade if diplomatic relations were restored.
Although formal ties remain suspended until now, Iranian Foreign Minister Ali Akbar Salehi recently expressed his "optimism" regarding the future of Egypt-Iran relations, stressing that they were "heading for the better".
At a September 19 press conference with his Egyptian, Turkish and Saudi counterparts, he said that economic relations with Egypt were "progressing well," pointing out that the volume of bilateral trade had doubled in recent months. "This is a sign that the future of bilateral relations will be better," the Iranian minister declared.
Morsi broke fresh ground in late August when he visited Tehran - the first Egyptian head of state to do so in more than three decades - for a summit of the Non-Aligned Movement (NAM), where he formally handed over the movement's rotating presidency to Iranian counterpart Ahmadinejad.
In an unprecedented show of warmth, Morsi referred to Ahmedinejad as "my dear brother," and to Iran as "the sister Islamic republic of Iran".
But while Morsi's Tehran trip may have served to break the ice, Idris says the visit "was mostly for reasons of protocol; to formally pass the NAM presidency from Egypt to Iran".
Idris, who served as head of the Arab affairs committee in Egypt's last (now-disbanded) parliament, went on to explain that, despite Tehran's strong desire to restore diplomatic ties, there were both "internal and external obstacles" currently preventing Egypt from doing so.
"Externally, such a move would adversely impact Egypt's relations with the Gulf countries, particularly Saudi Arabia, whose animosity towards Iran is well known," said Idris. "What's more, the Egyptian government is currently negotiating a hefty loan package from the IMF, which the US would likely block in the event that Cairo restored relations with Tehran."
On the domestic front, he added, the resumption of ties with Iran "would alienate Egypt's nascent Salafist parties, which oppose normalizing relations with a Shi'ite power that they believe wants to promote Shi'ite ideology in Sunni-Muslim Egypt."
Egypt's Salafist parties, established in the wake of the revolution early last year and which espouse an ultraconservative brand of Islam, won almost a quarter of the seats in the People's Assembly (the lower house of parliament) in Egypt's first post-Mubarak legislative elections.
Yet perhaps the most serious obstacle to the speedy restoration of Egypt-Iran ties, say analysts, is Cairo's position - articulated by Morsi on more than one occasion - on the ongoing crisis in Syria.
While speaking at the NAM summit in Tehran, Morsi no doubt irked his Iranian hosts by coming out firmly on the side of Syria's armed insurgency. Declaring that the government of Syrian President Bashar al-Assad had "lost its legitimacy," he went so far as to compare the Damascus regime with Israel's perennial occupation of Palestine.
While Morsi has repeatedly ruled out foreign military involvement in Syria, he nevertheless went on to assert that the crisis could only be resolved through "effective intervention" from outside.
Tehran, which counts Syria as its only regional ally in its ongoing confrontation with the US-led Western powers, has continued to support the Damascus regime against Syria's armed - and increasingly violent - opposition.
"Tehran's continued support for al-Assad has become the latest stumbling-block before Egypt-Iran rapprochement," said Idris. "The resumption of ties with Iran now appears to be conditioned on the latter forsaking its support for Damascus."
Only days before Morsi spoke in Tehran, a spokesman for Egypt's Muslim Brotherhood - from which the Egyptian president hails - stated: "The normalization of relations with Iran is impossible as long as Iran continues to support the Assad regime. Egypt cannot restore ties with Iran at the expense of the Syrian people and the security of the Gulf."
Diplomatic ties between the two countries were first severed in 1979, in the immediate wake of Iran's Islamic Revolution, after former Egyptian president Anwar Sadat signed the Camp David peace agreement with Israel. Cairo further alienated the nascent Islamic Republic later the same year by granting political asylum to deposed shah of Iran Mohammad Reza Pahlavi.
Relations became downright hostile during the 1980s, when Egypt openly supported Saddam Hussein's Iraq against revolutionary Iran in the eight-year war of attrition between the two countries. Today, Cairo remains the only Arab capital not to have official diplomatic relations with Tehran.
"The formal restoration of ties cannot be ruled out in the medium term," asserted Idris. "But in light of ongoing regional developments, such a step by Egypt is highly unlikely in the immediate future."
Tweet
Pope Shenouda Article