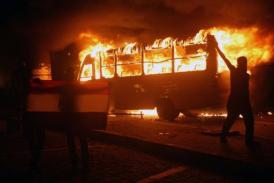 Egypt's state prosecutor has asked the general intelligence service and interior ministry to provide possible evidence in a probe of Islamists over clashes with liberals last week, state media said on Tuesday.

The prosecutor was acting on 53 complaints, some against senior members of President Mohamed Morsi's Muslim Brotherhood movement, of orchestrating Friday's unrest in which dozens of people were injured, Al-Akhbar newspaper reported.
Essam al-Erian, the acting head of the Brotherhood's political party, is among those accused of organising the rally that degenerated into the worst clashes between supporters and opponents of Morsi since his election in June.
The demonstration was called to denounce the acquittal of former regime members accused of a deadly attack against protesters during the uprising that overthrew president Hosni Mubarak in early 2011.
It was held in Cairo's Tahrir Square a day after Morsi unsuccessfully tried to remove the prosecutor, Abdel Meguid Mahmud, following the acquittal of 24 former regime officials and supporters.
Mahmud, a Mubarak appointee, cannot be fired or replaced unless he quits or reaches retirement age, according to a law meant to shield him from presidential interference.
Opponents of the Brotherhood accused the Islamists of organising the rally to overshadow a protest by liberal and secular-leaning groups to denounce Islamist domination of a body drafting the new constitution.
Witnesses said the violence in Tahrir Square erupted after Brotherhood supporters took apart a podium from which protesters were chanting against the Islamists.
On Tuesday, Brotherhood lawyer Abdel Moneim Abdel Maqsud filed a complaint on behalf of 180 members of the movement asking the prosecutor to investigate the violence, including the torching of buses used to transport Islamist protesters.
The Brotherhood said its members had come under attack, and accused its opponents of defamation.
"Campaign of incitement against Islamists," read the front page banner headline of the Freedom and Justice Party's newspaper. The Muslim Brotherhood, banned under Mubarak, formed the FJ after his overthrew in February last year.
Tweet
Pope Shenouda Article