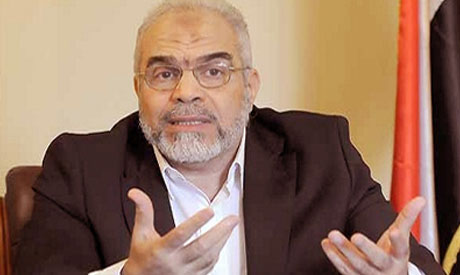 In an apparent about-face, the Muslim Brotherhood has on Wednesday admitted for the first time that some of its youth members took part in the clashes against opposition protesters last Friday in Cairo.

The Brotherhood, from which Egyptian president Mohamed Morsi hails, originally denied taking part in the violent attacks carried out against liberals and leftists forces who were protesting against the domination of the constituent assembly writing the constitution by Islamists.
Eyewitnesses have claimed all week that Brotherhood supporters in the square attacked peaceful demonstrators and destryed podiums because they wanted to stop all chants against president Morsi.
For several days after the clashes, which left over 150 injured, the Brotherhood pointed finger at “thugs” and "agents of the dismantled state security," but spokesman Mahmoud Ghozlan on Wednesday told Ahram Arabic-language news website some “hasty Brotherhood youth” were involved in the free-for-all, which lasted for several hours in the iconic Tahrir square that was the cradle of last year’s popular revolt.
“The group was not initially going to take part in the demonstrations, but had a change of heart after learning that those who were going to protest shared some of our aims: protesting against the (Battle of the Camel) verdict that acquitted the killers of revolutionaries,” Ghozlan explained.
“We announced that we would participate in the protest on Friday starting at 04:00 pm, and the clashes happened before that."
However, Ghazlan added that some of the group’s youth members went to Tahrir in the early afternoon hours and took part in the clashes.
Several opposition political groups have called for another mass demonstration in Tahrir on Friday, dubbed “Egypt for all Egyptians”, which calls for social justice and rejects “the Brotherhood’s domination of the constituent assembly.”
The Brotherhood has struggled in recent months to win over critics, who accuse the group of wielding extraordinary power behind the scenes.
The group has been particularly criticised for leaving little room for the opposition to take part in the task of writing the country’s first post-revolution constitution that has already been the subject of intense debate.
In an apparent attempt to quell anger at the Brotherhood among liberal and left critics, Ghazlan said "there will be no need for the Brotherhood to take part in protests that feature other political forces to avoid tarnishing the image of the 25 January revolution.”
Tweet
Pope Shenouda Article