Hibis Temple is back on Egypt's tourist path 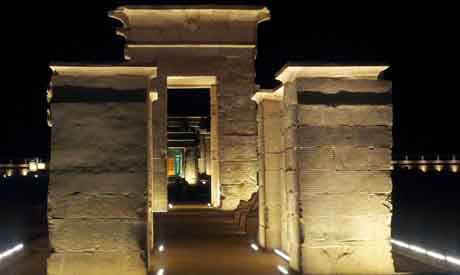 After almost six decades of restoration, the 27th Dynasty Hibis Temple at Kharga Oasis regains its original allure and will open its doors to visitors Sunday.

The inauguration is due to be attended by Prime Minister Hisham Kandil and Minister of State for Antiquities Mohamed Ibrahim, as well as top governmental officials and archaeologists.
Hibis Temple was closed for restoration in the late 1980s and declared off limits to visitors. Ibrahim said the deterioration of the temple started as early as 1958 when the level of ground water in Kharga Oasis rose, endangering the temple. Efforts were then made to control the subterranean water that had risen because of irrigation projects in the surrounding area. A drainage channel was excavated to direct the excess water. The former sacred lake of the temple was re-dug to contain the water.
But, Ibrahim said, these solutions were only temporary as the temple continued to weaken under water leakages. Cracks spread all over the temple’s walls, columns tilted and reliefs were damaged.
In 1980s, the Supreme Council of Antiquities (now the Ministry of State for Antiquities) suggested physically removing the temple and rebuilding it on higher dry ground to stop any further damage. The suggestion was ultimately rejected.
A committee of archaeologists, engineers and restorers rejected the relocation plan fearing the collapse of the temple during the dismantling and reconstruction process.
The committee pointed out that half of the blocks and columns of the temple were in a critical condition. The committee suggested restoring the temple in situ.
Restoration work began in early 2000s. Columns and walls were consolidated, cracks repaired and reliefs restored. To protect the temple from drainage and underground water, insulation materials were used as a protective layer between the ground and the foundation of the temple. New lighting systems were installed to allow access to the temple at night.
Hibis Temple is the best preserved temple in the Western Desert. It was built by King Darius I. It was also used as a garrison until 330BC, and it contains evidence of use in later periods, including the early Christian period.
There are also signs that it was used by Muslim pilgrims en route to Mecca
Tweet
Pope Shenouda Article